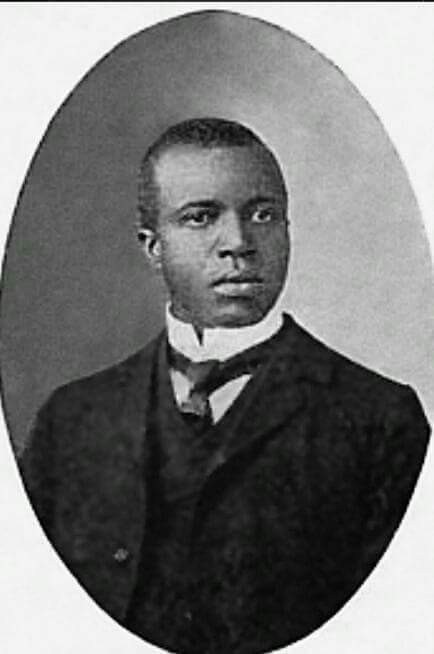 By 1916, Joplin was suffering from tertiary syphilis and a resulting descent into insanity.

In January 1917, he was admitted to Manhattan State Hospital, a mental institution and he died there.

After Joplin’s death at the age of just 49, from advanced syphilis, he was buried in a pauper’s grave that remained unmarked for 57 years. His grave at Saint Michaels Cemetery in East Elmhurst was finally given a marker in 1974.

Scott Joplin was a composer and pianist. Joplin achieved fame for his ragtime compositions, and was later dubbed “The King of Ragtime”. During his brief career, he wrote 44 original ragtime pieces, one ragtime ballet, and two operas. One of his first pieces, the “Maple Leaf Rag”, became ragtime’s first and most influential hit, and has been recognized as the archetypal rag.

Joplin was born into a musical family of laborers in Northeast Texas, and developed his musical knowledge with the help of local teachers, most notably Julius Weiss. Joplin grew up in Texarkana, where he formed a vocal quartet, and taught mandolin and guitar. During the late 1880s he left his job as a laborer with the railroad, and travelled around the American South as an itinerant musician. He went to Chicago for the World’s Fair of 1893, which played a major part in making ragtime a national craze by 1897.

Joplin moved to Sedalia, Missouri, in 1894, and earned a living as a piano teacher, continuing to tour the South. In Sedalia, he taught future ragtime composers Arthur Marshall, Scott Hayden and Brun Campbell. Joplin began publishing music in 1895, and publication of his “Maple Leaf Rag” in 1899 brought him fame. This piece had a profound influence on subsequent writers of ragtime. It also brought the composer a steady income for life. Joplin did not reach this level of success again and frequently had financial problems.