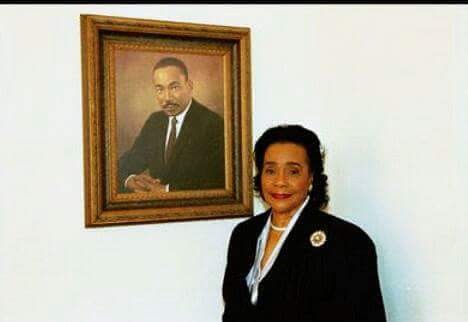 Coretta Scott-King gave a speech at the Palmer House Hilton in Chicago, she called on the civil rights community to join in the struggle against homophobia and anti-gay bias. “Homophobia is like racism and anti-Semitism and other forms of bigotry in that it seeks to dehumanize a large group of people, to deny their humanity, their dignity and personhood”, she stated. “This sets the stage for further repression and violence that spread all too easily to victimize the next minority group.”

Coretta Scott-King’s support of LGBT rights was strongly criticized by some African-American pastors. She called her critics “misinformed” and said that Martin Luther King’s message to the world was one of equality and inclusion.

In 2003, she invited the National Gay and Lesbian Task Force to take part in observances of the 40th anniversary of the March on Washington and Martin Luther King’s I Have a Dream speech. It was the first time that an LGBT rights group had been invited to a major event of the African-American community.

On March 23, 2004, she told an audience at Richard Stockton College in Pomona, New Jersey, that same-sex marriage is a civil rights issue. She denounced a proposed amendment advanced by President George W. Bush to the United States Constitution that would ban equal marriage rights for same-sex couples.

In her speech King also criticized a group of black pastors in her home state of Georgia for backing a bill to amend that state’s constitution to block gay and lesbian couples from marrying. Scott-King is quoted as saying “Gay and lesbian people have families, and their families should have legal protection, whether by marriage or civil union. A constitutional amendment banning same-sex marriages is a form of gay bashing and it would do nothing at all to protect traditional marriage.”