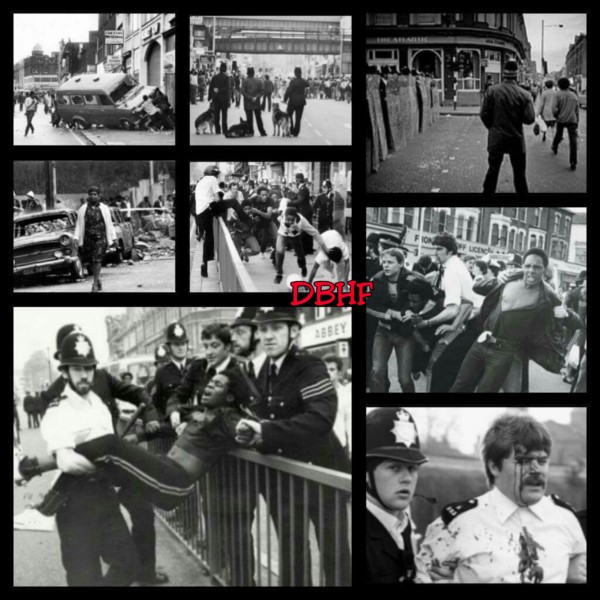 The 1981 Brixton riot (or Brixton uprising) was a confrontation between the Metropolitan Police and protesters in Lambeth, South London, England, between April 10-11, 1981.

The main riot on April 11th, dubbed “Bloody Saturday” by TIME magazine, resulted in almost 280 * injuries to police and 65 * injuries to members of the public; over 100 vehicles were burned, including 56 police vehicles; and almost 150 buildings were damaged, with thirty burned. There were 82 arrests. Reports suggested that up to 5,000 people were involved.

BACKGROUND: Brixton, in South London, was an area with serious social and economic problems. The whole United Kingdom was affected by a recession by 1981, but the local African-Caribbean community was suffering particularly high unemployment, poor housing, and a higher than average crime rate.

In the preceding months there had been growing unease between the police and the inhabitants of Lambeth. In January 1981, a house fire, a suspected racially-motivated arson, had killed a number of black youths in New Cross; the police investigation was criticised as inadequate. Black activists, including Darcus Howe, organized a march for the “Black People’s Day of Action” on the 2nd of March. Accounts of turnout vary from between 5,000 to 20,000 to 25,000.

The marchers walked 17 miles from Deptford to Hyde Park, passing the Houses of Parliament and Fleet Street. While the majority of the march finished in Hyde Park without incident, there was some confrontation with police at Blackfriars. Les Back wrote that, “While the local press reported the march respectfully, the national papers unloaded the full weight of racial stereotyping.”

The Evening Standard’s front page headline was a photo of a policeman with a bloody face next to a quote from Darcus Howe referring to the march as, “A good day.” A few weeks later, some of the organizers of the march were arrested, charged with ‘inciting to riot.’ They were later acquitted.

Read more about this riot & the aftermath at: Daily Black History Facts