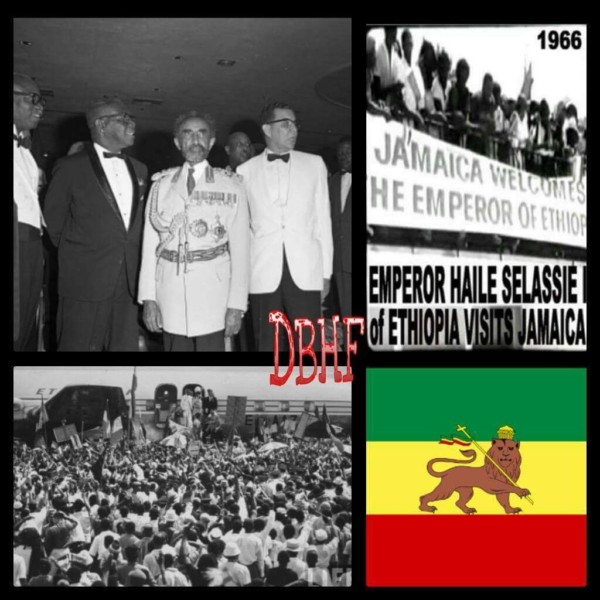 SELASSIE VISITS JAMAICA: Haile Selassie had already met with several Rasta elders in Addis Ababa, and had allowed Rastafari and other people of African descent to settle on his personal land in Shashamane.

Haile Selassie visited Jamaica on Thursday, April 21, 1966. Some 100,000 Rastafari from all over Jamaica descended on Palisadoes Airport in Kingston, having heard that the man whom they considered to be God was coming to visit them. They waited at the airport playing drums and smoking large quantities of marijuana.

When Haile Selassie’s Ethiopian Airlines flight landed at the airport at 1:30 PM, the crowd surrounded his plane on the tarmac. The day had been overcast and stormy. After about half an hour, the door swung open and the emperor appeared at the top of the mobile steps. A deafening tumult was heard from the crowd, who beat calabash drums, lit firecrackers, waved signs, and sounded Abeng horns of the Maroons.

All protocol was dropped as the crowd pressed past the security forces and onto the red carpet that had been laid out for the reception. Selassie waved from the top of the steps; some interpreters have claimed that he shed tears, although this is disputed. He then returned into the plane, disappearing for several more minutes. Finally Jamaican authorities were obliged to request Ras Mortimer Planno, a well-known Rasta leader, to climb the steps, enter the plane, and negotiate the Emperor’s descent.

When Planno reemerged, he announced to the crowd: “The Emperor has instructed me to tell you to be calm. Step back and let the Emperor land” After Planno escorted the African monarch down the steps, journalists were puzzled by Selassie’s refusal to walk on the red carpet on the way to his limousine. [hence grounation, Iyaric equivalent of foundation, “uplifted” with the sound of the word ground in the sense of “making contact with the soil”] He was then driven to the King’s House, the residence of Governor-General Clifford Campbell.