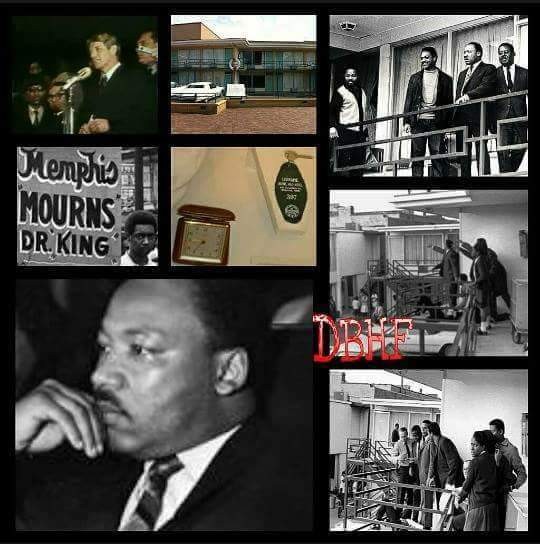 James Earl Ray, a fugitive from the Missouri State Penitentiary, was arrested in London at Heathrow Airport two months later, extradited to the United States, and charged with the crime.

The Lorraine Motel, where Dr. King was assassinated, is now the site of the National Civil Rights Museum. The wreath marks the approximate place Dr. King was standing at the time.

DR. KING ON DEATH: Dr. King received death threats constantly due to his prominence in the civil rights movement. As a consequence of these threats, he confronted death constantly, making it a central part of his philosophy. He believed, and taught, that murder could not stop the struggle for equal rights.

After the 1963 JFK assassination, he told his wife Coretta: “This is what is going to happen to me also. I keep telling you, this is a sick society.”

MEMPHIS: Dr. King traveled to Memphis, Tennessee in support of striking African American sanitation workers. The workers had staged a walkout on February 11, 1968, to protest unequal wages and working conditions. At the time, Memphis paid black workers significantly lower wages than whites. In addition, unlike their white counterparts, blacks received no pay if they stayed home during bad weather; consequently, most blacks were compelled to work even in driving rain and snow storms.

On April 3, King returned to Memphis to address a gathering at the Mason Temple (World Headquarters of the Church of God in Christ). His airline flight to Memphis was delayed by a bomb threat against his plane. With a thunderstorm raging outside, King delivered the last speech of his life, now known as the “I’ve Been to the Mountaintop” address. As he neared the close, he made reference to the bomb threat:

“And then I got to Memphis. And some began to say the threats… or talk about the threats that were out. What would happen to me from some of our sick white brothers? Well, I don’t know what will happen now. We’ve got some difficult days ahead. But it doesn’t matter with me now. Because I’ve been to the mountaintop. [applause] And I don’t mind. Like anybody, I would like to live a long life. Longevity has its place. But I’m not concerned about that now. I just want to do God’s will. And He’s allowed me to go up to the mountain. And I’ve looked over. And I’ve seen the promised land. I may not get there with you. But I want you to know tonight, that we, as a people, will get to the promised land! [applause] And so I’m happy, tonight. I’m not worried about anything. I’m not fearing any man. Mine eyes have seen the glory of the coming.”

Read about his assassination and legacy at: Daily Black History Facts