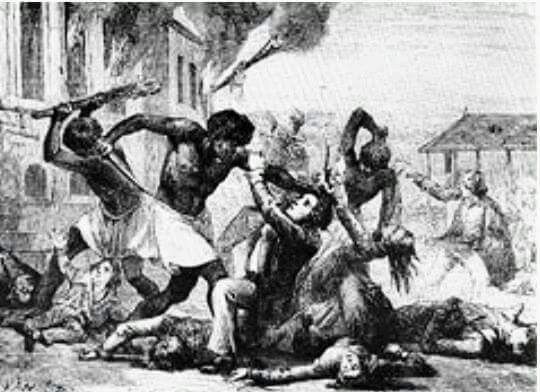 The New York Slave Revolt of 1712 was an uprising in New York City of 23 enslaved Africans who killed 9 whites and injured another 6. More than three times that number of Black people, 70, were arrested and jailed. Of these, 27 were put on trial, and 21 convicted and executed.

THE REVOLT: Conditions in New York were ripe for rebellion. Enslaved Africans lived within proximity of each other, making communication easy. They also often worked among free blacks, a situation that did not exist on most plantations.

Slaves in the city could communicate and plan a conspiracy more easily than among those on plantations. They were kept under abusive and harsh conditions, and naturally resented their treatment. The men gathered on the night of April 6, 1712, and set fire to a building on Maiden Lane near Broadway.

While the white colonists tried to put out the fire, the enslaved African Americans attacked them and ran off.

THE AFTERMATH: 70 African-Americans were arrested and put in jail. 6 are reported to have committed suicide. 27 were put on trial, 21 of whom were convicted and sentenced to death. 20 were burned to death and one was executed on a breaking wheel. This was a form of punishment no longer used on whites at the time. The severity of punishment was in proportion to white fears of insurrection.

After the revolt, laws governing the lives of blacks in New York were made more restrictive. African Americans were not permitted to gather in groups of more than three, they were not permitted to carry firearms, and gambling was outlawed. Other crimes, such as property damage, rape, and conspiracy to kill, were made punishable by death. Free blacks were no longer allowed to own land. Slave owners who decided to free their slaves were required to pay a tax of £200, a price much higher than the price of a slave.