​August 7, 1930: The Last Confirmed Lynching Of Blacks In The Northern United States Occurs In Marion, Indiana. 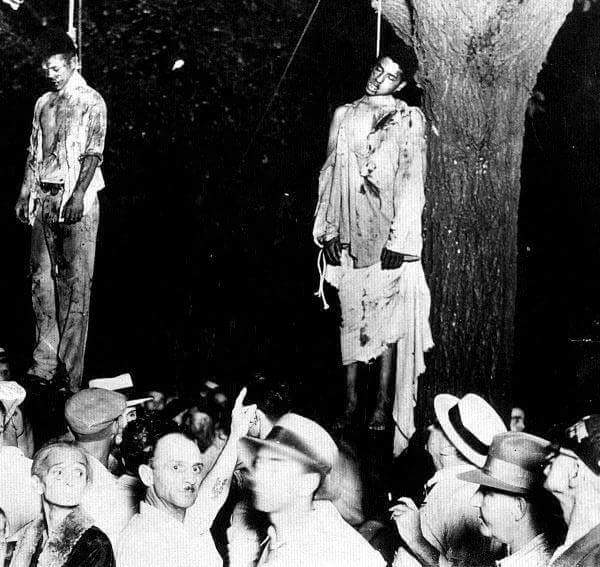 THE LYNCHINGS: Shipp and Smith had been arrested the night before, charged with robbing and murdering a white factory worker, Claude Deeter, and raping his white girlfriend, Mary Ball.

A large crowd broke into the jail with sledgehammers, beat the two men, and hanged them. When Abram Smith tried to free himself from the noose as his body was hauled up by the rope, he was lowered and then his arms broken to prevent him from trying to free himself again. Police officers in the crowd cooperated in the lynching.

A 3rd person, 16-year-old James Cameron, narrowly escaped lynching thanks to an unidentified participant who announced that he had nothing to do with the rape or murder.

A studio photographer, Lawrence Beitler, took a photograph of the dead bodies hanging from a tree surrounded by a large crowd; thousands of copies of the photograph were sold.

?Mary Ball later testified that SHE HAD NOT been raped, contrary to the accusations against the three men. The police accused all three men of murder and rape.?

James Cameron has stated in interviews that Shipp and Smith had, in fact, shot and killed Claude Deeter, a white man. He has said that he fled when he realized what was going on.

POPULAR CULTURE: In 1937 Abel Meeropol, a Jewish school teacher from New York, saw a copy of this photograph. Meeropol later said that the photograph “haunted me for days” and inspired the poem “Strange Fruit”. It was published in the New York Teacher and later in the magazine New Masses, in both cases under the pseudonym Lewis Allan. This poem became the text for the song of the same name, performed and popularized by Billie Holiday.

MUSEUM: In 1988, James Cameron founded and became director of America’s Black Holocaust Museum, a museum in Milwaukee, Wisconsin, dedicated to the history of lynching in the United States.