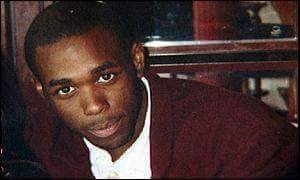 In Brixton, London after Wayne Douglas, a black man, died in police custody, race riots occurred.
The Brixton riots of 1995 began on December 13th, after the death of a black 26-year-old, Wayne Douglas, in police custody. Douglas had allegedly robbed a couple in bed at knifepoint hours earlier. Trouble broke out after what had been a peaceful protest outside the Brixton Police Station where the death occurred. With several hundred people involved, the riot resulted in damage to property and vehicles in the area.

Police sealed off a three-kilometre (2 mile) area around Brixton in south London.

The riot lasted for 5 hours. 22 people were arrested and charged with public order offences, theft and criminal damage. Three police officers were hurt.

The Deputy Prime Minister at the time, Michael Heseltine, condemned the riots and said “efforts to improve Brixton would continue”.