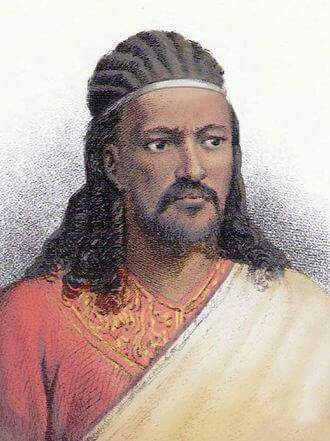 Kassa Hailu was crowned Tewodros II, Emperor of Ethiopia, by Abuna Salama III in a ceremony at the church of Derasge Maryam.

Téwodros II (baptized as Sahle Dingil, and often referred to in the west by the English equivalent Theodore II) was the Emperor of Ethiopia from 1855 until his death.

He was born Kassa Haile Giorgis, but was more regularly referred to as Kassa Hailu (meaning “restitution” and “His [or the] power”). His rule is often placed as the beginning of modern Ethiopia, ending the decentralized Zemene Mesafint (Era of the Princes).

Read about his impact on pop culture at: Daily Black History Facts