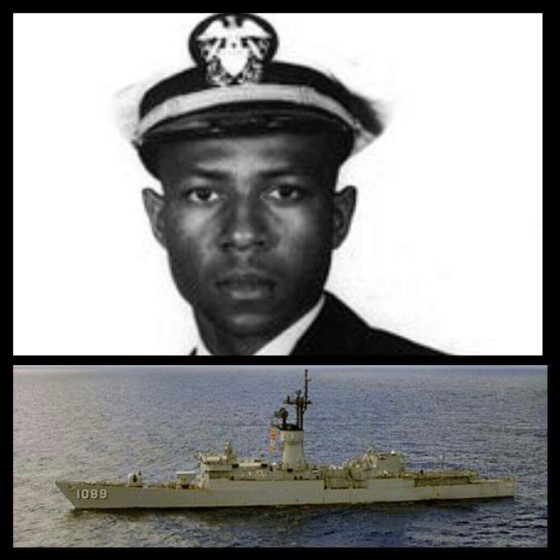 The Navy commissioned the Knox-class frigate USS Jesse L. Brown (FF-1089), the 1st U.S. ship named in honor of an African American. Present at the commissioning ceremony in Boston, Massachusetts, were Daisy Brown Thorne (who had remarried), Pamela Brown, and Hudner, who gave a dedication.

The ship was decommissioned on July 27, 1994 and renamed the Damiyat after being commissioned with the Egyptian navy.

ABOUT JEESE L. BROWN: Jesse LeRoy Brown was the 1st African-American naval aviator in the United States Navy, a recipient of the Distinguished Flying Cross, and the first naval officer killed in the Korean War.

Born in Hattiesburg, Mississippi, to an impoverished family, Brown was avidly interested in aircraft from a young age. He graduated as salutatorian of his high school, notwithstanding its racial segregation, and was later awarded a degree from The Ohio State University. Brown enlisted in the U.S. Navy in 1946, becoming a midshipman. Brown earned his pilot wings on October 21, 1948 amid a flurry of press coverage; in January 1949 he was assigned to Fighter Squadron 32 aboard the USS Leyte.

At the outset of the Korean War, the Leyte was ordered to the Korean Peninsula, arriving in October 1950. Brown, an ensign, flew 20 combat missions before his F4U Corsair aircraft came under fire and crashed on a remote mountaintop on December 4, 1950 while supporting ground troops at the Battle of Chosin Reservoir. Brown died of his wounds despite the efforts of wingman Thomas J. Hudner, Jr., who intentionally crashed his own aircraft in a rescue attempt, for which he was awarded the Medal of Honor.

Brown’s successes in the segregated and desegregated U.S. military were memorialized in several books. The frigate USS Jesse L. Brown (FF-1089) was named in his honor.

Read about his honors at: Daily Black History Facts