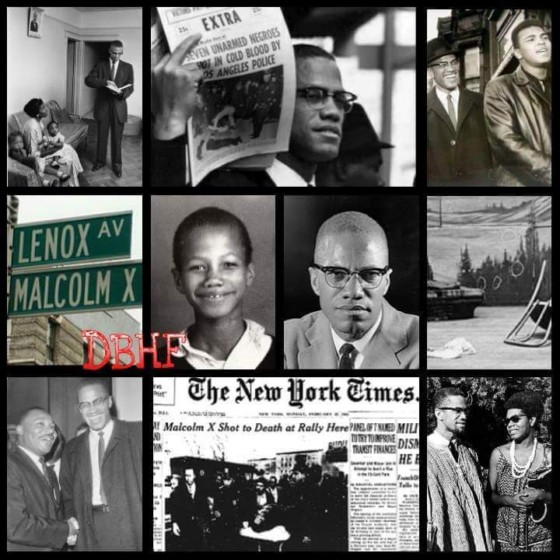 As Malcolm X prepared to address the Organization of Afro-American Unity in Manhattan’s Audubon Ballroom, a disturbance broke out in the 400-person audience—a man yelled, “Nigga! Get your hand outta my pocket!”

At 3:10 P.M., just after he has begun to address the OAAU rally and his bodyguards moved to quiet the disturbance, a man seated in the front row rushed forward and shot him once in the chest with a double-barreled sawed-off shotgun. Two other men charged the stage and fired semi-automatic handguns, hitting Malcolm X several times.

Malcolm X was pronounced dead at 3:30 pm, shortly after he arrived at Columbia Presbyterian Hospital.

According to the autopsy report, Malcolm X’s body had 21 gunshot wounds to his chest, left shoulder, and arms and legs; ten of the wounds were buckshot to his left chest and shoulder from the initial shotgun blast.

One gunman, NATION OF ISLAM member Talmadge Hayer (also known as Thomas Hagan) was seized and beaten by the crowd before the police arrived minutes later; witnesses identified the others as Norman 3X Butler and Thomas 15X Johnson, also Nation members. Hayer confessed at trial to have been one of the handgun shooters, but refused to identify the other assailants except to assert that they were not Butler and Johnson. All three were convicted.

Butler, now known as Muhammad Abdul Aziz, was paroled in 1985 and became the head of the Nation’s Harlem mosque in 1998. He continues to maintain his innocence. Johnson, who changed his name to Khalil Islam, rejected the Nation’s teachings while in prison and converted to Sunni Islam. Released in 1987, he maintained his innocence until his death in August 2009. Hayer, now known as Mujahid Halim, was paroled in 2010.

Malcolm X, born Malcolm Little and also known as El-Hajj Malik El-Shabazz (Arabic: اﻟﺤﺎج ّ ﻣﻻﻚ اﻟﺸﺒﺎز ), was an African-American Muslim minister and human rights activist. To his admirers, he was a courageous advocate for the rights of blacks, a man who indicted white America in the harshest terms for its crimes against black Americans. Detractors accused him of preaching racism, black supremacy, and violence. He has been called one of the greatest and most influential African Americans in history.

Malcolm X’s father died—killed by white supremacists, it was rumored—when he was young, and at least one of his uncles was lynched. When he was 13, his mother was placed in a mental hospital, and he was placed in a series of foster homes. In 1946, at age 20, he went to prison for breaking and entering.

In prison, Malcolm X became a member of the Nation of Islam; after his parole in 1952, he quickly rose to become one of its leaders. For a dozen years, Malcolm X was the public face of the controversial group, but disillusionment with Nation of Islam head Elijah Muhammad led him to leave the Nation in March 1964. After a period of travel in Africa and the Middle East, he returned to the United States, where he founded Muslim Mosque, Inc. and the Organization of Afro-American Unity. In February 1965, less than a year after leaving the Nation of Islam, he was assassinated by three members of the group.

Read more about his legacy at: Daily Black History Facts