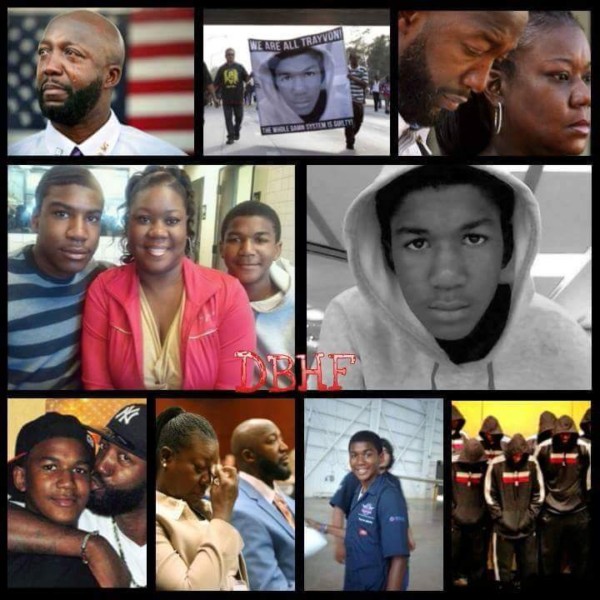 In Sanford, Florida, Trayvon Martin, an unarmed 17-year-old, was stalked, chased & murdered by 28-year-old George Zimmerman.
Zimmerman was the (self) appointed neighborhood watch coordinator for the gated community where Martin was temporarily staying and where the shooting took place.
While in his vehicle on a personal errand, Zimmerman noticed Martin walking inside the community. Zimmerman called the Sanford Police Department to report Martin’s behavior as suspicious, stating that Martin was “cutting in-between houses…walking very leisurely for the [rainy] weather” and “looking at all the houses”. According to a police report, “there is no indication that Trayvon Martin was involved in any criminal activity at the time of the encounter”.

While still on the phone with the police dispatcher, Zimmerman left his vehicle. After the phone call concluded, there was a violent encounter between Martin and Zimmerman. The encounter ended with Zimmerman fatally shooting Martin once in the chest at close range.

When police arrived on the scene, Zimmerman told them that Martin had attacked him and that he had shot Martin in self-defense. Zimmerman was bleeding from the nose and from two vertical lacerations on the back of his head. EMTs treated Zimmerman at the scene, after which he was taken to the Sanford Police Department.

Zimmerman was detained and questioned for approximately five hours. He was then released without being charged; at the time, police said they found no evidence to contradict Zimmerman’s claim of self-defense.

The circumstances of Martin’s death, the initial decision not to charge Zimmerman, and questions about Florida’s “Stand Your Ground” law received national and international attention. Allegations of racist motivation for both the shooting and police conduct, along with intense media reporting that was sometimes inaccurate, contributed to public demands for Zimmerman’s arrest. On March 22, 2012, a Special Prosecutor was appointed to take over the investigation.

On April 11, 2012, the Special Prosecutor filed a charge of murder in the second degree against Zimmerman, who then turned himself in and was placed in custody. The prosecution’s account of what they allege happened on the night of the shooting is largely contained in the Affidavit of Probable Cause. Zimmerman pleaded not guilty to the charge and is currently out on a $1 million bond while he awaits trial; he has requested a hearing under the “stand your ground” law provisions.

In February 2013, Judge Debra S. Nelson set Zimmerman’s jury selection to begin on June 10, with 500 potential jurors being summoned. She also ruled for the stand your ground hearing to begin on April 22.
Zimmerman’s trial began on June 10, 2013, in Sanford.

On July 13, 2013, a jury acquitted him of second-degree murder and of manslaughter charges.

On February 24, 2015, the Justice Department announced that “there was not enough evidence for a federal hate crime prosecution.”