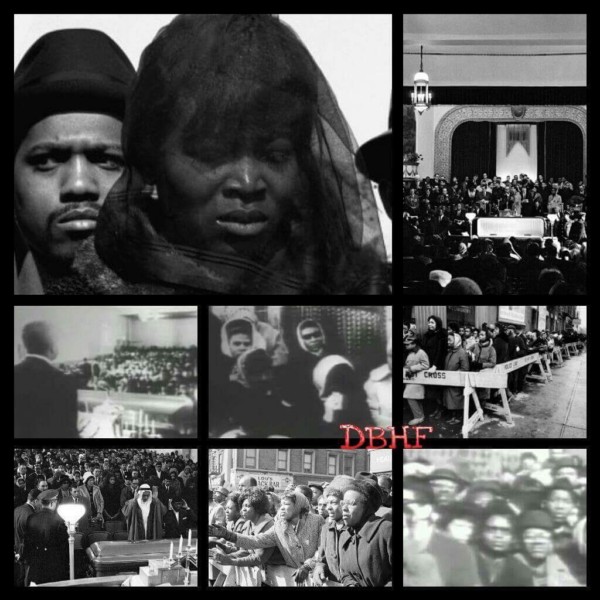 Days earlier a public viewing was held at Harlem’s Unity Funeral Home from February 23 through February 26, and it was estimated that between 14,000 and 30,000 mourners attended.

Among the civil rights leaders attending the funeral were John Lewis, Bayard Rustin and Ossie Davis.

9:20 A.M.: Malcolm’s body is moved from the Unity Funeral Home in Harlem to Bishop Alvin S. Child’s Faith Temple Church of God in Christ at 1763 Amsterdam Avenue for the funeral services.

9:50 A.M.:
Approximately 1500 people attend the services, 500 of them outside the church itself. Services began which were presided over by playwright-actor/activist, Ossie Davis.
Davis delivered the eulogy, describing Malcolm X as ‘Our shining Black  Prince’:

“There are those who will consider it their duty, as friends of the Negro people, to tell us to revile him, to flee, even from the presence of his memory, to save ourselves by writing him out of the history of our turbulent times. Many will ask what Harlem finds to honor in this stormy, controversial and bold young captain—and we will smile. Many will say turn away—away from this man, for he is not a man but a demon, a monster, a subverter and an enemy of the black man—and we will smile. They will say that he is of hate—a fanatic, a racist—who can only bring evil to the cause for which you struggle! And we will answer and say to them: Did you ever talk to Brother Malcolm? Did you ever touch him, or have him smile at you? Did you ever really listen to him? Did he ever do a mean thing? Was he ever himself associated with violence or any public disturbance? For if you did you would know him. And if you knew him you would know why we must honor him.”