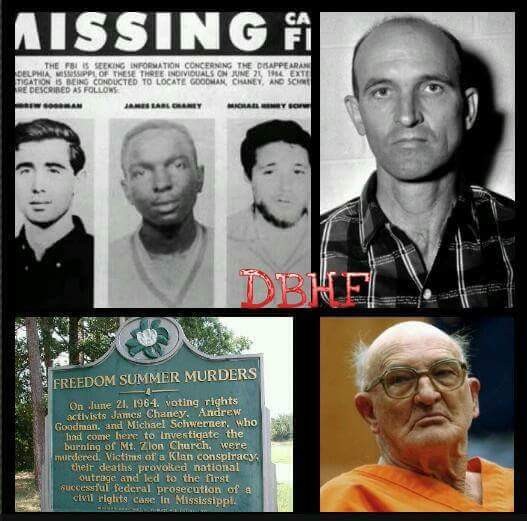 Edgar Ray Killen is arrested as a suspect in the 1964 murders of three civil rights workers: James Chaney, Andrew Goodman and Michael Schwerner.

On June 21, 2005, the 41st anniversary of the crime, has found guilty in state court of three counts of manslaughter. He appealed the verdict, but his sentence of three times 20 years in prison was upheld on January 12, 2007, by the Mississippi Supreme Court.

MURDERS: During the “Freedom Summer” of 1964, James Chaney, 21, a young black man from Meridian, Mississippi and Andrew Goodman, 20, and Michael Schwerner, 24, two Jewish men from New York, were murdered in Philadelphia, Mississippi. Killen, along with Cecil Price, then deputy sheriff of Neshoba County, was found to have assembled a group of armed men who conspired, pursued and killed the three civil rights workers. The Mississippi civil rights workers murders galvanized the nation and helped bring about the passage of the 1964 Civil Rights Act and the 1965 Voting Rights Act.

At the time of the murders, the state of Mississippi made little effort to prosecute the guilty parties. The FBI, under the pro-civil-rights President Lyndon Johnson and Attorney General Robert F. Kennedy, conducted a vigorous investigation. A federal prosecutor, John Doar, circumventing dismissals by federal judges, opened a grand jury in December 1964.

In November 1965, Solicitor General Thurgood Marshall appeared before the Supreme Court to defend the federal government’s authority in bringing charges. 18 men, including Killen, were arrested and charged with conspiracy to violate the victims’ civil rights in United States v. Price.

The trial began in 1966 in the federal courthouse in Meridian, Mississippi before an all-white jury convicted seven conspirators, including the deputy sheriff, and acquitted eight others. It was the first time a white jury convicted a white official of civil rights killings.

For 3 men, including Killen, the trial ended in a hung jury, with the jurors deadlocked 11–1 in favor of conviction. The lone holdout said that she could not convict a preacher. The prosecution decided not to retry Killen and he was released. None of the men found guilty would serve more than 6 years in prison.

Read more about the arrest and aftermath at: Daily Black History Facts