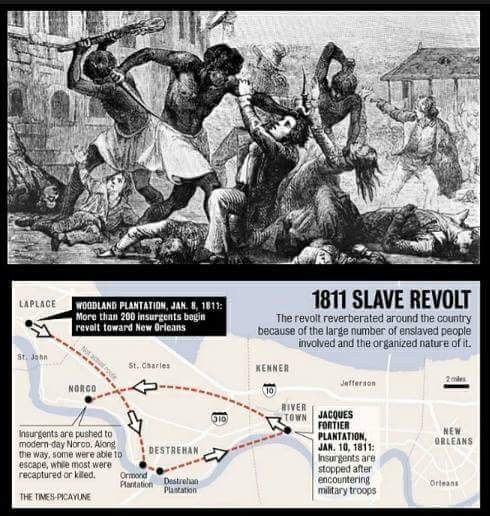 Charles Deslonde led 200 slaves in 1811 German Coast Uprising, which is known as the largest slave revolt in U.S. history.

It began on January 8, 1811 in the Territory of Orleans. The revolt took place on the east coast of the Mississippi River in what are now St. John the Baptist and St. Charles parishes, Louisiana. While the slave insurgency was the largest in U.S. history, the rebels killed only 2 white men. In confrontations with militia and executions after trial, 95 black people were killed.

The trials in New Orleans, also in the parish court, resulted in the conviction and summary executions of 29 slaves. Three of these were publicly hanged in the Place d’Armes, now Jackson Square, and their heads were put up to decorate the city’s gates.

Between 64 and 125 enslaved men marched from sugar plantations near present-day LaPlace on the German Coast toward the city of New Orleans. They collected more men along the way. Some accounts claimed a total of 200-500 slaves participated. During their two-day, twenty-mile march, the men burned five plantation houses (three completely), several sugar houses, and crops. They were armed mostly with hand tools.

White men led by officials of the territory formed militia companies to hunt down and kill the insurgents. Over the next two weeks, white planters and officials interrogated, tried and executed an additional 44 insurgents who had been captured. Executions were by hanging or decapitation. Whites displayed the bodies as a warning to intimidate slaves. The heads of some were put on spikes and displayed at plantations.

Read about the aftermath of the uprising at: Daily Black History Facts