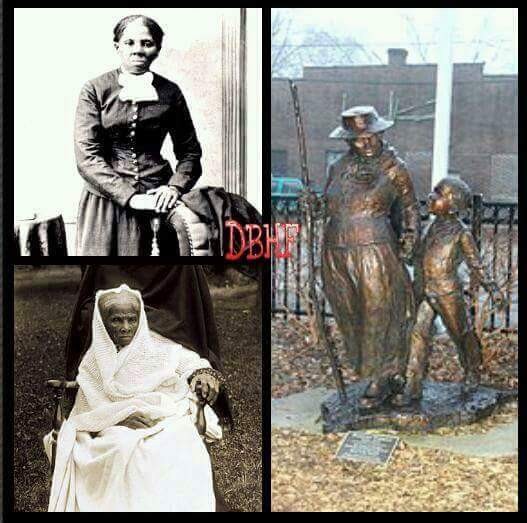 Surrounded by friends and family members, Harriet Tubman died of pneumonia. Just before she died, she told those in the room: “I go to prepare a place for you.”#WomensHistoryMonth

Harriet Tubman (born Araminta Harriet Ross) was a abolitionist, humanitarian, and Union spy during the American Civil War. Born into slavery, Tubman escaped and subsequently made more than thirteen missions to rescue more than 70 slaves using the network of antislavery activists and safe houses known as the Underground Railroad.

Tubman later helped John Brown recruit men for his raid on Harpers Ferry, and in the post-war era struggled for women’s suffrage.

As a child in Dorchester County, Maryland, Tubman was beaten by masters to whom she was hired out. Early in her life, she suffered a severe head wound when hit by a heavy metal weight. The injury caused disabling seizures, narcoleptic attacks, headaches, and powerful visionary and dream experiences, which occurred throughout her life. A devout Christian, Tubman ascribed the visions and vivid dreams to revelations from God.

In 1849, Tubman escaped to Philadelphia, then immediately returned to Maryland to rescue her family. Slowly, one group at a time, she brought relatives out of the state, and eventually guided dozens of other slaves to freedom. Traveling by night, Tubman (or “Moses”, as she was called) “never lost a passenger”. Large rewards were offered for the return of many of the fugitive slaves, but no one then knew that Tubman was the one helping them. When the Southern-dominated Congress passed the Fugitive Slave Act of 1850, requiring law officials in free states to aid efforts to recapture slaves, she helped guide fugitives farther north into Canada, where slavery was prohibited.

When the American Civil War began, Tubman worked for the Union Army, first as a cook and nurse, and then as an armed scout and spy. The first woman to lead an armed expedition in the war, she guided the Combahee River Raid, which liberated more than 700 slaves in South Carolina. After the war, she retired to the family home in Auburn, New York, where she cared for her aging parents.

She became active in the women’s suffrage movement in New York until illness overtook her. Near the end of her life, she lived in a home for elderly African Americans that she had helped found years earlier.

Read about her incredible legacy at: Daily Black History Facts