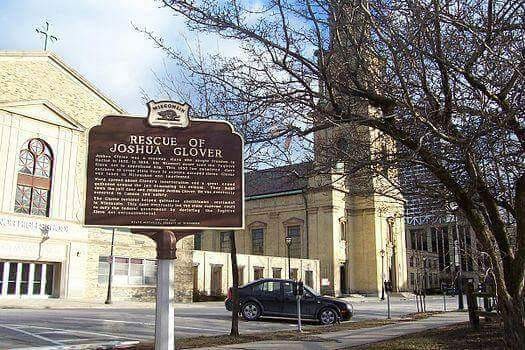 5000 citizens of Milwaukee, Wisconsin broke down the jail door of the courthouse and rescued Joshua Glover. This act led to Wisconsin becoming the only state to declare the 1850 Fugitive Slave Act unconstitutional.

Joshua Glover was a runaway slave from St. Louis, Missouri who sought asylum in Racine, Wisconsin in 1852. Upon learning his whereabouts in 1854, slave owner Bennami Garland attempted to use the Fugitive Slave Act to recover him. Glover was captured and taken to a Milwaukee jail.

A mob led by Sherman Booth broke into the jail and rescued Glover, who then escaped to Canada via the Underground Railroad. The rescue of Glover and the federal government’s subsequent attempt to prosecute Booth helped to galvanize the abolitionist movement in the state that eventually led to Wisconsin becoming the only state to declare the Act unconstitutional.

LEGACY: A Wisconsin Historical Marker at Cathedral Square Park in Milwaukee marks the site of the original court house and jail where Joshua Glover was imprisoned by federal marshals, and later rescued by a mob of 5,000 people.

Efforts are underway to create a park monument which meets the National Park Service’s requirements for an official National Underground Railroad Network to Freedom site.