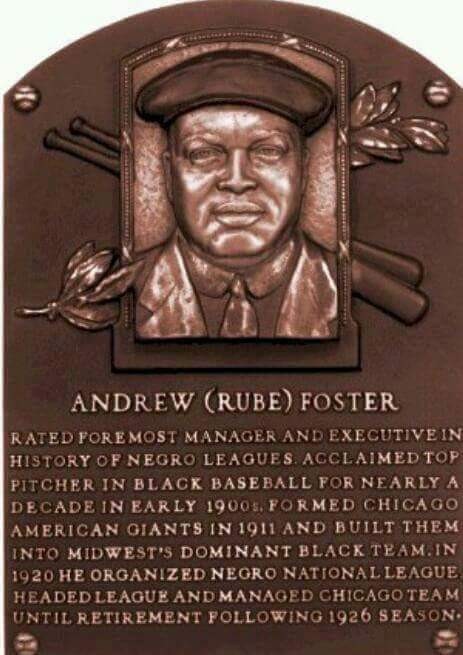 Rube Foster, star pitcher, manager and organizer in the Negro Leagues, was elected to the baseball Hall of Fame by the Special Veterans’ Committee.

Andrew “Rube” Foster was an African-American baseball player, manager, and pioneer executive in the Negro leagues. He was elected to the Baseball Hall of Fame in 1981.

Foster, considered by historians to have been perhaps the best African-American pitcher of the first decade of the 1900s, also founded and managed the Chicago American Giants, one of the most successful black baseball teams of the pre-integration era. Most notably, he organized the Negro National League, the first long-lasting professional league for African-American ballplayers, which operated from 1920 to 1931. He is known as the “father of Black Baseball.”

HIS LEGACY: In 1981, Foster was elected to the National Baseball Hall of Fame. He was the 1st representative of the Negro leagues elected as a pioneer or executive.

On December 30, 2009, the U.S. Postal Service announced that it planned to issue a pair of postage stamps in June honoring Negro leagues Baseball.

On July 17, 2010, the Postal Service issued a se-tenant pair of 44-cent, first-class, U.S. commemorative postage stamps, to honor the all-black professional baseball leagues that operated from 1920 to about 1960. One of the stamps depicts Foster, along with his name and the words “NEGRO LEAGUES BASEBALL”. The stamps were formally issued at the Negro Leagues Baseball Museum, during the celebration of the museum’s twentieth anniversary.