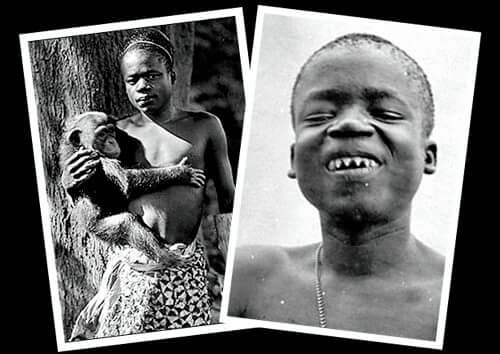 At the age of 32, Ota Benga built a ceremonial fire, chipped off the caps on his teeth and shot himself in the heart with a stolen pistol.
Ota Benga was a Congolese Mbuti pygmy known for being featured with other Africans in an anthropology exhibit at the Louisiana Purchase Exposition in St. Louis, Missouri in 1904, and later in a controversial HUMAN ZOO exhibit in the Bronx Zoo in 1906.

Benga had been freed from slave traders in the Congo by the missionary Samuel Phillips Verner, who had taken him to Missouri. At the Bronx Zoo, Benga had free run of the grounds before and after he was “exhibited” in the zoo’s Monkey House. Displays of non-Western humans as examples of “earlier stages” of human evolution were common in the early 20th century, when racial theories were frequently intertwined with concepts from evolutionary biology.

The mayor released Benga to the custody of Reverend James M. Gordon, who supervised the Howard Colored Orphan Asylum in Brooklyn and made him a ward. That same year Gordon arranged for Benga to be cared for in Virginia, where he paid for him to acquire American clothes and to have his teeth capped, so the young man could be part of society.

Benga was tutored in English and began to work. When, several years later, the outbreak of World War I stopped passenger travel on the oceans and prevented his returning to Africa, he became depressed.

He was buried in an unmarked grave in the black section of the Old City Cemetery, near his benefactor, Gregory Hayes. At some point, the remains of both men went missing. Local oral history indicates that Hayes and Ota Benga were eventually moved from the Old Cemetery to White Rock Cemetery, a burial ground that later fell into disrepair.

Read about his life at the Bronx Zoo & his legacy at: Daily Black History Facts