​September 10, 1963: Schools Throughout Alabama Are Desegregated 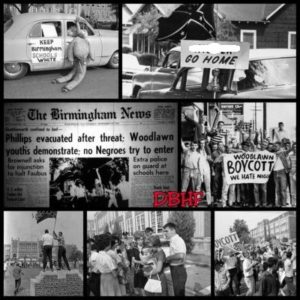 At Woodlawn High School, 9 people were arrested — 2 after a battle with police — as demonstrators gathered and 1,000 students refused to enter. After fighting back demonstrators, Birmingham Police Capt. Glenn Evans told the students, “Classes are in session. We want you to enter the building or leave the grounds.”

No problems were reported at Graymont or Ramsay schools, although attendance was low. Senior Horace Blackstock was among those who walked out of Ramsay High stated:

“We talked about demonstrating but we figured someone might get hurt and cause trouble,” Blackstock told The News. “I don’t want to go to a school with a Negro.”