A Barrel of Laughs: Why Slaves Were Not Allowed to Laugh on Many Plantations

Slaves with boisterous personalities and wanting to laugh or shout often had to stifle their outbursts by the use of the “laughing barrel.” It was not by choice but this is what they were trained to do on the plantation. The #black house of praise during this time also used “shouting barrels” when the slaves would steal away at night for church services. The slaves would stifle the noises they wanted to make by holding their heads over barrels (sometimes filled with water) to keep slave patrols and their white plantation owners from hearing them.

Poet Maya Angelou was quoted saying, “the slaves were not allowed to laugh on many plantations. When the urge to laugh became irrepressible, the slaves had a ‘laughing barrel’ into which they would lean way down, with the pretext of getting something, and laugh. The slaves would then go back to whatever it was they were doing.”

White people viewed slaves laughing as a form of disrespect to them. Some plantations owners had barrels set up on the plantation and when a slave heard something funny they would have to run off to one of these barrels in order to laugh. Some people believe that this is where the phrase a “barrel of laughs” derived. 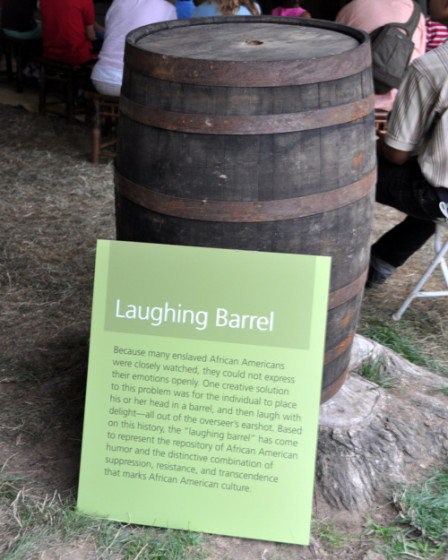