Henry was born on July 2, 1922, in Dublin, Mississippi, the son of sharecroppers. As a young boy, he worked in the cotton fields alongside his family on the Flowers Plantation outside of Clarksdale. Henry despised cotton, he knew at a very young age the hardships that it brought to Blacks working on the plantation.

Henry attended all-black Coahoma County Agricultural High School. After graduating from high school, Henry worked as a night clerk at a motel to earn money for college but ended up enlisting in the Army. While in the Army, he found out racial discrimination and segregation existed even for those blacks fighting for their country.

While in the army, he determined he would work for equality and justice for blacks in his home state. When he returned home in 1946, a Progressive Voters’ League had been formed to work for the implementation of the 1944 Supreme Court decision abolishing white primary.

As a veteran, Henry was interested in the decision that the Mississippi legislature had exempted returning veterans from paying the poll tax. Under the poll tax laws, a person had to have paid his poll tax for two years prior to the time that he voted. Therefore, he tried to get black Mississippians to go down to the courthouse to register to vote. However, several veterans, who were non-white, were unable to register.

He went to the circuit clerk’s office to register, but he was rejected just as other blacks before him. He was asked by the clerk to present a certificate showing that he was exempt from the poll tax. Although he provided the certificate, the clerk said that Henry still needed to pass various tests to show that he was qualified to vote. He was finally able to register to vote after he read several sections of the state constitution and went satisfactorily through more tests.

Henry was able to use the G. I. Bill, a law that provided educational benefits for World War II veterans, to attend Xavier College (now Xavier University) in New Orleans. Graduating in 1950 with a pharmaceutical degree, he returned to Clarksdale and opened the Fourth Street Drug Store along with K. W. Walker, a white Mississippian. It was the only black-owned drugstore in the area.

Henry got involved within local and state activities. He organized the local branch of the National Association for the Advancement of Colored People (NAACP) and in 1959, was elected president of the Mississippi organization. He served in the NAACP for decades. He also served as president of Council of Federated Organizations (COFO) in 1962 and helped organize the “freedom vote,” a mock statewide general election to parallel the Mississippi gubernatorial election of 1963.

An incident that occurred during the freedom vote campaign prompted Henry to become involved in challenging the re-licensing of the major Jackson television station, WLBT, in the 1960s. The station had a history of anti-black programming and policy, and when Henry and Dr. R.L.T. Smith went to the television station to purchase airtime, the station manager told them that “niggers couldn’t buy time.” Henry and colleagues then initiated a successful legal challenge to remove the station’s license. As a result of his actions, more African-American news anchors and employees came on board at television stations across the nation. Henry was elected chairman of the WLBT board of directors in December 1979.

Henry was elected to the Mississippi House of Representatives in 1982, holding the seat until 1996. He died in 1997 of congestive heart failure at a hospital near his home in Clarksdale, following a stroke. 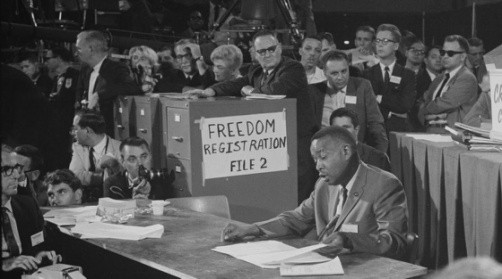 Aaron Henry
« Previous PostRags to Riches and Back to Rags: The Jesse Binga Story Next Post »The Unforgettable Springfield Race Riots of 1908