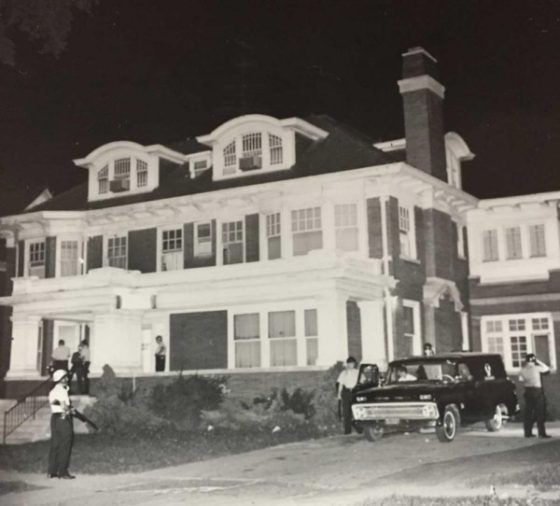 Detroit Police along with the Michigan State Police, and other National Guardsmen arrived at the Algiers Motel Annex under the suspicion they were arriving where a sniper was located. Three young black men, Carl Cooper, Michael Clark, and Lee Forsythe, were in a room in the motel, listening to music with two white women from Ohio, Juli Hysell and Karen Molloy, when Cooper fired a starter pistol shooting blanks out the window. Because the police thought they were under attack, they fired back.

The authorities rushed into the motel annex to find the sniper. According to later testimony, Detroit police officers most likely shot and killed Cooper who ran downstairs with his pistol when they entered the building. Detroit police later would claim that they found Cooper already dead in a first-floor room when they entered the building. No one was ever charged with the death of Carl Cooper, the youngest victim, who was 17.

Clark, Forsythe, Hysell and Molloy, and other guests including 19-year-old Aubrey Pollard, a 26-year-old Vietnam veteran Robert Greene, 18-year-old Larry Reed, lead singer for the Rhythm and Blues group the Dramatics, and band road manager, 18-year-old Fred Temple, were rounded up by Detroit police officers and faced against a downstairs hall wall. Hysell and Molloy were pulled out of the lineup and stripped naked. Melvin Dismukes, a black security guard for a nearby store, entered the annex while the police held the guests against the wall.

The next young person killed was, Pollard, he was shot and killed by officer Ronald August after he took him into Annex Room A-3.  August later admitted to the killing but claimed it was in self-defense. The third person to die, Temple, was shot by Detroit Police Officer Robert Paille who also claimed he killed him in self-defense. Despite the three deceased bodies in the Motel Annex, the Detroit police officers on the scene, Paille, August, and David Senak, did not report any of the deaths to the Detroit Police Homicide Bureau as required.  Instead they left the annex after demanding that the survivors keep quiet about the incident.

The deaths were reported to the press as having happened in an exchange of gunfire with snipers. However, the Detroit Free Press interviewed the witnesses of the events, who all claimed to have been unarmed and that the dead men were not snipers. The deaths were reported to Congressman John Conyers and the NAACP and motel witnesses appeared in a press conference held by Conyers on the conduct of the military and police. The US Department of Justice began an investigation under assistant District Attorney Robert Murphy, who interviewed witnesses. The witnesses’ accounts were delivered to Detroit prosecutors on July 29.