April 18, 1861: Nicholas Biddle Is The First Person To Shed Blood In The Civil War

On this day in 1861, Nicholas Biddle became “the first blood of the Civil War” in the midst of mob violence in Baltimore.

Born in the late 1790s, he escaped slavery in Delaware and resided in Pennsylvania most of his adult life where he worked in a Pottsville hotel. One thing about Biddle is that real name is basically lost to history. It’s odd considering he didn’t change his name until his late-30s or early-40s.

Around this time, the Philadelphia’s famous banker Nicholas Biddle had rolled into town to establish an iron furnace. Biddle adopted the name and whoever he was called before was forgotten. The other origin of Biddle is that he escaped to Philadelphia early on and worked in the service the more famous Biddle, then he took the name upon settling in Pottsville.

In addition to working in a hotel, Biddle was also heavily involved in the Underground Railroad and worked with the Gillingham Family. Now known as the Gillingham House, the residence served as a station house for escaped slaves heading further into the north. While Pennsylvania was technically outside of the slaveholding U.S, it was a border state.

By the time the American Civil War broke out Nicholas Biddle was in his mid-60s. However, he would head to Washington D.C. to join the Union’s call for soldiers.

In befriending members of the National Light Infantry and the Washington Artillery, Biddle joined the First Defenders—several militias from Pennsylvania—as the orderly of Captain James Wren.

Traveling to D.C, the Defenders had to change connecting trains in Baltimore, a slave port. Not only that, but it was what you could call a “hostile city” at the time. The vibe of Baltimore was that Maryland needed to ditch the Union. Of course, it didn’t help that there was a train of Union recruits was in the city.

The angry citizens of Baltimore were spoiling for a fight and picked up whatever weapons and projectiles they could find. The First Defenders on the other had guns—that didn’t work. Captain Thomas Yeager was extremely concerned about the situation and expected “an intended massacre in Baltimore.” While the First Defenders were met by Union troops lead by Lt. General John C. Pemberton to get them to the station, this would only be halfway. The rest of the way, the Defenders were escorted by Baltimore police.

In Baltimore, the First Defenders ended up in a hive of aggression as a mob 2,000 people deep moved in on them. It was upon seeing Biddle that they exploded. There were chants of “N****r in uniform!” The mob threw objects at the group and Biddle was struck in the head with a brick. Others in the group were hit by bricks and bottles as the mob tried to overtake the train.

When the engineer stepped in, the mob stopped trying to knock the locomotive off the tracks. Battered and bruised, the First Defenders would arrive in Washington D.C later in the day where President Lincoln met them personally.

The following day the Pratt Street Riot broke out. The 6th Massachusetts was taking the same route as the First Defenders and retaliated by firing on the Baltimore rioters. By the end of the incident, four soldiers and twelve rioters were dead. The militia managed to escape but not with thirty-six of their men being injured and having to leave the bulk of their gear.

As for the Union soldier who was the first to spill blood, Nicholas Biddle was unable to enlist for the Union. Troops of color weren’t admitted into the U.S Army until May 1863 with the establishment of the United States Colored Troops.

Biddle would return to Pottsville and passed in 1876 at 82. The marker for his grave had been destroyed not only after he was buried. It has since been replaced. 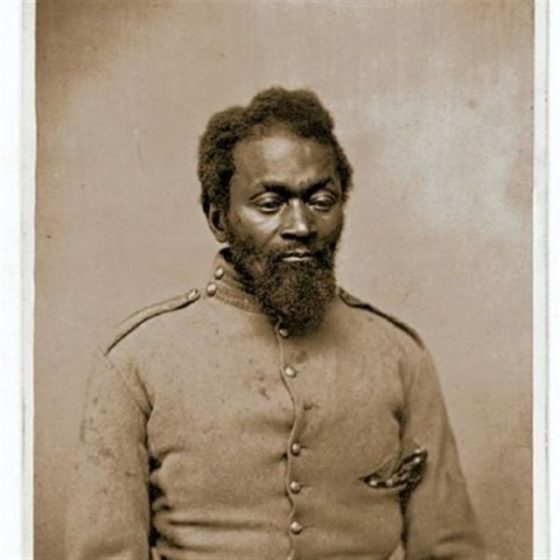