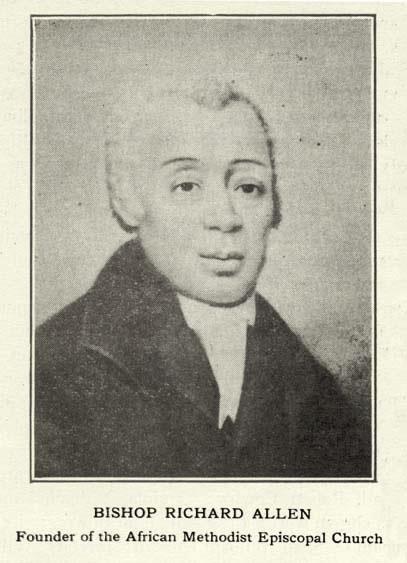 In 1830, Mother Bethel hosted the first national convention of black Americans, which led to the formation of the American Society of Free Persons of Colour.

Richard Allen, along with Absalom Jones, came together to form the Free African Society (FAS) on April 12, 1787. The Society, though not religiously affiliated, proved much like a church in serving the black community.

NAACP founder, W.E.B. DuBois, writing a century later, called the FAS, “the first wavering step of a people toward organized social life.” Organized as an altruistic society for extending mutual aid to the widowed, sick, and jobless, it was funded by dues-paying members. The core of Allen’s beliefs can be summarized with his trust that members by lifting themselves would lift all black people. The society also regulated marriages, taught thrift, censured drunkenness, condemned adultery, and attempted to improve morals.

Bishop Allen confronted a new threat soon after. The American Colonization Society was an all-white group which included Henry Clay, Andrew Jackson, James Madison, and Thomas Jefferson, who endorsed black emigration to Africa either through voluntary means or through forceful deportation. Clay called blacks “pernicious and useless, if not dangerous.” Jefferson said, “Let the ocean divide the white man from the man of color.”

Allen called a mass meeting of the black Philadelphia community to oppose this. Allen feared that if the black community supported this movement there would be no one left to aid slaves and also felt blacks should be treated as American citizens with all attendant rights. He wrote, “Whereas our ancestors (not of choice) were the first successful cultivators of the wilds of America, we their descendants feel ourselves entitled to participate in the blessings of her soil, which their blood and sweat manured.” Due to the efforts of Allen and other black leaders, the Colonization movement lost momentum after a number of years.

In 1830, Mother Bethel hosted the first national convention of black Americans, which led to the formation of the American Society of Free Persons of Colour. The meeting was called to establish a national network of black support and to fight new and heinous actions by the American Colonization Society, and to fight slavery.

One of Allen’s last major accomplishments was the formation of the Free Produce Society in December 1830. Members of the society pledged to buy only products made by non-slave labor, whenever possible. Initially advocated by the abolitionist William Lloyd Garrison, the boycott also served as an exhibition of black self-reliance. One of Allen’s last lessons was the economic power of boycotting, a favorite weapon of the Civil Rights Movement of the 1960s.

Allen would regularly (and furtively) meet in the woods with preacher John Gray and others. Delaware law forbade blacks from congregating without whites present. Circuit preachers such as Gray offered hope, eternal salvation, and abolitionism’s promise to blacks. Most appealing to Allen personally were the call for discipline and individual responsibility, and the fiery nature of the preachers.
Master Sturgis came to feel that slaves were better workers because of Christianity — a lesson taught him by Richard Allen. As such, when Allen requested that Reverend Freeborn Garrettson be allowed to preach at the farm, Sturgis acceded. Garrettson was a former slave owner who now preached abolition. His sermon at the farm that day was based on Daniel 5:27, the verse in which God’s handwriting appears on the wall to Babylonian King Belshazzar.

Part of the writing on the wall translates to: “Thou art weighed in the balances, and art found wanting.” The preacher with the remarkably apt Christian name believed the sin of slaveholding was so onerous that on Judgment Day all slave owners would be weighed and be found wanting.

A shaken Sturgis decided that he would free Allen. But, he was debt-ridden and couldn’t afford to do so. He agreed to allow Allen to buy his own freedom for $2,000. Allen worked nights and at off-hours cutting cord wood and doing odd jobs. By the time he was 20, he bought his freedom.

The National Negro Congress was established in 1936 to “secure the right of the Negro people to be free from Jim Crowism, segregation, discrimination, lynching, and mob violence” and “to promote the spirit of unity and cooperation between Negro and white people.” It was conceived as a national coalition of church, labor, and civil rights organizations that would coordinate protest action in the face of deteriorating economic conditions for blacks. The National Negro Congress (NNC) was the culmination of the Communist Party’s Depression-era effort to unite black and white workers and intellectuals in the fight for racial justice, and marked the apex of Communist Party prestige in African American communities. This collection comprises of the voluminous working files of John P. Davis and successive executive secretaries of the National Negro Congress. Beginning with papers from 1933 that predate the formation of the National Negro Congress, the wide-ranging collection documents Davis’s involvement in the Negro Industrial League and includes the “Report Files” of Davis’s interest and work on the “Negro problem.”

In 1815, Pennsylvania Abolition Society supported Richard Allen of the Bethel Church in their successful legal battle against take over by the white Methodist leadership.

Pennsylvania Abolition Society was listed along with Allen in the certificate that formally transferred ownership of the property on which Bethel stood.

As early as 1688, four German Quakers in Germantown near Philadelphia protested slavery in a resolution that condemned the “traffic of Men-body.” By the 1770s, abolitionism was a full-scale movement in Pennsylvania. Led by such Quaker activists as Anthony Benezet and John Woolman, many Philadelphia slaveholders of all denominations had begun bowing to pressure to emancipate their slaves on religious, moral, and economic grounds.

In April 1775, Benezet called the first meeting of the Society for the Relief of Free Negroes Unlawfully held in Bondagevii at the Rising Sun Tavern. Thomas Paineviii was among the ten white Philadelphians who attended; seven of the group were Quakers. Often referred to as the Abolition Society, the group focused on intervention in the cases of blacks and Indians who claimed to have been illegally enslaved. Of the twenty-four men who attended the four meetings held before the Society disbanded, seventeen were Quakers.

PAS reorganized once again in 1787. While previously, artisans and shopkeepers had been the core of the organization, PAS broadened its membership to include such prominent figures as Benjamin Franklin and Benjamin Rush, who helped write the Society’s new constitution. PAS became much more aggressive in its strategy of litigation on behalf of free blacks, and attempted to work more closely with the Free African Society in a wide range of social, political and educational activity

In 1787, PAS organized local efforts to support the crusade to ban the international slave trade and petitioned the Constitutional Convention to institute a ban. The following year, in collaboration with the Society of Friends, PAS successfully petitioned the Pennsylvania legislature to amend the gradual abolition act of 1780. As a result of the 2000-signature petition and other lobbying efforts, the legislature prohibited the transportation of slave children or pregnant women out of Pennsyvania, as well as the building, outfitting or sending of slave ships from Philadelphia. The amended act imposed heavier fines for slave kidnapping, and made it illegal to separate slave families by more than ten million.

In September 1830, black representatives from seven states convened in Philadelphia at the Bethel AME church for the first Negro Convention. A civic meeting, it was the first on such a scale organized by African-American leaders. Allen presided over the meeting, which addressed both regional and national topics. The convention occurred after the 1826 and 1829 riots in Cincinnati, when whites had attacked blacks and destroyed their businesses. After the 1829 rioting, 1200 blacks left the city to go to Canada.[6] As a result, the Negro Convention addressed organizing aid to such settlements in Canada, among other issues. The 1830 meeting was the beginning of an organizational effort known as the Negro Convention Movement, part of 19th-century institution building in the black community.[7] Conventions were held regularly on a national level.