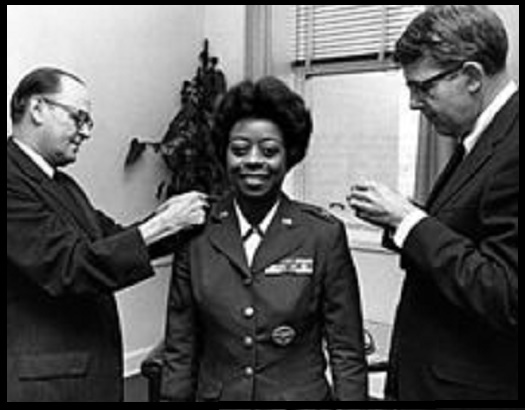 Lucas was born in Stamford, Connecticut, on November 28, 1920. After high school, she attended Tuskegee University in Alabama, where she received a degree in education. Shortly after graduation, she enlisted in the Women’s Army auxiliary Corps in 1942. She was also one of the first black women to attend Joint Forces Staff College in Norfolk, Virginia. She transferred from the Army to the newly created Air Force in 1947.

In the early 1950s, while stationed at an Air Force base in Tokyo, Col. Lucas taught English to Japanese schoolchildren and college students in her spare time.

She received a master’s degree in educational psychology from Columbia University in 1957 and moved to the Washington, D.C. area in the early 1960s. Col. Lucas held a variety of positions, mainly in research and education.

“Most people don’t realize that among all the servicemen who enter the military annually, about 45,000 of them read below the fifth-grade level, and more than 30 percent of these men are black.”

“Right now if I have any aim, it’s just to reach these men, to interest them in education and to motivate them to continue on.” -Ruth Lucas

Col. Lucas retired from the Air Force in 1970. Her military decorations included the Defense Meritorious Service Medal. After her military retirement, Col. Lucas became the director of urban services at the old Washington Technical Institute, one of three schools that merged in 1977 to form the University of the District of Columbia. She designed outreach programs to encourage high school students to pursue higher education. Col. Lucas died March 23, 2013 at her home in Washington, D.C.; she was 92.