Dr. Samuel DuBois Cook is a retired Dillard University president and, with his appointment to the Duke University faculty in 1966, was the first African American professor to hold a regular faculty appointment at any predominantly white college or university in the South. 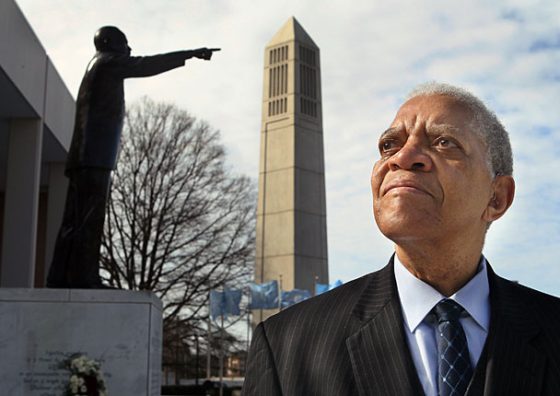 Dr. Cook was born on November 21, 1928, in Griffin, Georgia, to Mary Beatrice Daniel Cook and Reverend M.E. Cook, a Baptist minister who instilled a passion for education in all of his children. Cook attended Griffin Vocational High School and graduated in 1944. He later earned an A.B. degree in history from Morehouse College in Atlanta, Georgia, where he met and was mentored by Dr. Benjamin Mays. Cook then attended Ohio State University in Columbus, Ohio, where he earned his M.A. degree in political science and his Ph.D. in 1954.

He started his professional career as a teacher after a short stint in the U.S. Army. He taught political science at Southern University in Baton Rouge, Louisiana, in 1955. Dr. Cook then moved to Atlanta University, where he began teaching in 1956, and became politically active. He began working on black voter registration and served as youth director of the NAACP of Georgia.

He taught at several other colleges and later became the first black tenured professor at Duke University. He was also the first Black to hold a regular faculty appointment at a predominantly white university in the South.

In 1993, Dillard University honored Dr. Cook by naming the school’s new fine arts and communication center after him. That same year, Cook was elected by Duke University’s Board of Trustee as a Trustee Emeritus.

Dr. Samuel Dubois Cook
« Previous PostToday in 1868, a Convention Was Held, Which Protested the Expulsion of Blacks From Georgia's State Legislature Next Post »"Poem for My Father" by American Poet & Journalist, Quincy Troupe