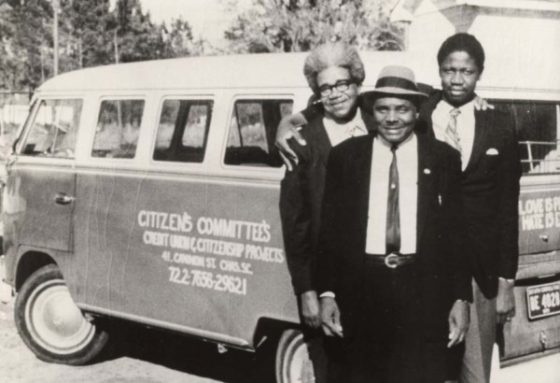 Esau Jenkins was a civil rights activist who saw the injustices that affected black children on Johns Island, South Carolina. He bused his children along with others living in the area to public schools in Charleston.

Jenkins was born on July 3, 1910, on Johns Island, he was the only child to Peter Jenkins and Eva Campbell. His formal education came to a halt while in the fourth grade, he stopped school to help supplement the family’s income.

At age seventeen, he married Janie Jones. Of their thirteen children, seven survived, all of whom earned college degrees. Jenkins was fully aware of the disadvantages black children had in the community. In 1945, he purchased a bus that was used to take children to the city. He later transported adults to their jobs. During the daily commutes, Jenkins stressed to the adults the importance of voting and taught them to recite passages from the state constitution (a requirement to vote in South Carolina during that time).

Jenkins founded the Progressive Club in 1948, the club was founded to educate Sea Island residents. At the suggestion of Septima Clark, Jenkins attended a workshop at the Highlander Folk School in Monteagle, Tennessee, in August 1954. Later that year, he invited Highlander staff, including founder Myles Horton, to visit Johns Island. Jenkins, Bernice Robinson, and Septima Clark collaborated with Highlander to establish a “Citizenship School” on Johns Island.

Jenkins wanted to educate adults so that they would be able to read when it came time to register to vote.  During the bus rides, Jenkins and his wife would teach their adult passengers the information needed to pass the literacy exam. The first school was a success and the schools soon spread to the other Sea Islands. The success of the first schools in the Sea Islands led Highlander to create others across the South, where tens of thousands of African Americans learned to read and became registered to vote.

Jenkins continued to work on issues of civil rights and social justice: he organized the Citizens Committee of Charleston in 1959, he helped organize the first Head Start center in Charleston, and he pressed Charleston’s sanitation department and bus system to hire their first black drivers. In addition to his civic work, Jenkins owned a fruit store, the Hot Spot Record Shop, and the J & P Motel & Café.

Shortly before his death, Jenkins was appointed to the state advisory committee for the U.S. Commission on Civil Rights. Jenkins died on October 30, 1972.