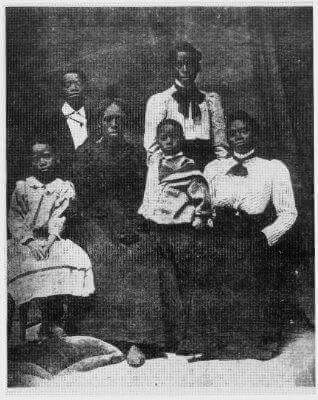 Pictured: Mrs. Baker and her surviving 5 children) *For many, the word lynching conjures up images of victims killed by hanging, but the term encompasses the taking of individual life by a mob under a wide variety of extralegal circumstances. In addition to the traditional noose, mobs riddled their victims with bullets, burned them to death, and mutilated their bodies.*

THE LYNCHING: Around 1am, Frazier Baker, an African-American postmaster in the predominantly white area of Lake City, South Carolina, awoke to discover a raging fire deliberately set in back of the small wooden structure that housed both his family and the town’s post office. Caught between the rising flames and a MOB of hostile and well-armed white men outside the building, Baker, his wife, and their 6 children sought unsuccessfully to douse the blaze.

As they prepared to flee the post office, the mob opened fire. The postmaster was shot several times and collapsed, fatally wounded. The barrage of gunfire continued unabated, and the 3 eldest Baker children were all seriously injured before they could escape through the open door.

Baker’s wife, Lavinia, attempted to follow with her infant daughter Julia, but a bullet passed through her hand, killing the baby and tearing her from her mother’s arms. Struck in the leg by a second bullet, Lavinia Baker collapsed beside the burning building. The mob then dispersed as quietly as it had appeared.

As flames consumed the wooden structure, local African Americans drawn by the gunfire offered sanctuary in their homes to the new widow and her 5 surviving children.

“REASONS” FOR THE LYNCHING: In the weeks preceding the fatal attack, Lake City whites had accused Frazier Baker of administrative incompetence and “ignorance,” had boycotted the post office, then burned it down at an earlier location.

On two separate occasions federal post office investigators found no evidence to substantiate the townspeople’s claims; clearly what infuriated whites was Baker’s race, and his elevation to a position of authority in the town. The men who joined the mob in Lake City no doubt saw Frazier Baker as the embodiment of the stereotypical “uppity nigger” who failed to respect the etiquette of “knowing one’s place” in the post-Reconstruction South, an etiquette carefully-constructed and ruthlessly-enforced by whites. In having the temerity to accept the appointment as postmaster, they reasoned, Baker forfeited his right to live in a “white man’s country.”

In their lurid imaginations, most whites saw black men as sexual predators and would-be “despoilers” of white homes. In the case of Lake City, however, a black home had been despoiled by whites guilty of the murder of an infant girl and her father. And Baker, like so many other black lynching victims, had not been guilty of rape, not even accused of it. Local whites targeted him solely on the basis of his insistence on serving out his commission as a black postmaster in a largely white community.

Read about the trial & aftermath at: Daily Black History Facts
.