First Published In London, Clotel or The President’s Daughter by William Wells Brown Is Considered To Be The First African American Novel

Clotel; or, The President’s Daughter is a novel by William Wells Brown (1815-84), a fugitive from slavery and abolitionist and was published in London, England in December 1853. It is often considered the first African-American novel. This novel focuses on the difficult lives of mulattoes in America and the “degraded and immoral condition of the relation of master and slave in the USA” (Brown). It is about the tragic lives of Currer, Althesea, and Clotel. In the novel, Currer is the former mulatto mistress of President Thomas Jefferson who together have two daughters, Althesea and Clotel. Because she was beautiful and the mistress of Jefferson, Currer and her daughters lived a confortable life, this changed when her master passes away. In the end, Currer and Althesea are auctioned to the notorious slave trader, Dick Walker. Clotel is bought by her lover Horatio Green. The separation of these three women is just the beginning of the injustices they face. 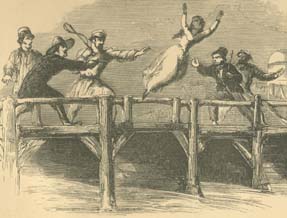 It gained notoriety amid the unconfirmed rumors regarding Thomas Jefferson and Sally Hemmings. Brown was still considered someone else’s legal property within the borders of the United States at the time of its publication. It is considered to be the first novel written by an African American.

Brown used the injustices of slavery to demonstrate the destructive effects it had on the African American family, most significantly the so-called tragic mulatto. Brown had escaped from slavery in Kentucky while still in his youth, and became active on the anti-slavery circuit.