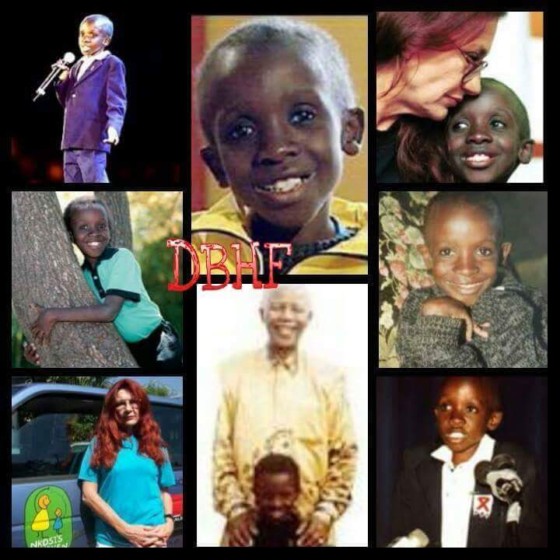 Nkosi Johnson (born Xolani Nkosi) was a South African child with HIV/AIDS, who made a powerful impact on public perceptions of the pandemic and its effects before his death at the age of 12. He was ranked fifth amongst SABC3’s Great South Africans.

At the time of his death in 2001, he was the longest-surviving HIV-positive born child.

Nelson Mandela referred to Nkosi as an “icon of the struggle for life.”

BACKGROUND: The young Nkosi Johnson first came to public attention in 1997, when a primary school in the Johannesburg suburb of Melville refused to accept the 8 year old as a pupil because of his HIV-positive status. The incident caused a furor at the highest political level—South Africa’s Constitution forbids discrimination on the grounds of medical status—and the school later reversed its decision.

Nkosi’s birth mother died of HIV/AIDS in the same year that he started school. His own condition steadily worsened over the years, although, with the help of medication and treatment, he was able to lead a fairly active life at school and at home.

Nkosi was the keynote speaker at the 13th International AIDS Conference, where he encouraged people with HIV/ AIDS to be open about the disease and to seek equal treatment.

Nkosi finished his speech with the words:

“Care for us and accept us —we are all human beings. We are normal. We have hands. We have feet. We can walk, we can talk, we have needs just like everyone else —don’t be afraid of us —we are all the same!”

Together with his foster mother, Nkosi founded a refuge for HIV positive mothers and their children, Nkosi’s Haven, in Johannesburg.

In November 2005, Gail represented Nkosi when he posthumously received the International Children’s Peace Prize from the hands of Mikhail Gorbachev.

Nkosi’s Haven received a prize of US $100,000 from the Kids Rights Foundation.