The Harlem Riot of 1943: African-Americans Fight Back for Equality

The 1943 Harlem riot began on August 1 in three different places. Crowds gathered in front of Hotel Braddock, in which the incident had taken place, and two other locations: Sydenham hospital and the 28th precinct stationhouse. The angry crowd dispersed throughout the city throwing stones at windows and looting shops; chaos ensued in the streets.

By the morning of August 2nd, Harlem looked as if it had been raided. It took great force on the part of the N.Y.C. Police Department to subdue rioters. During the riot, five Black people were killed by police, and almost 400 were injured. There were approximately 500 African-American men and women arrested during the chaotic incident. 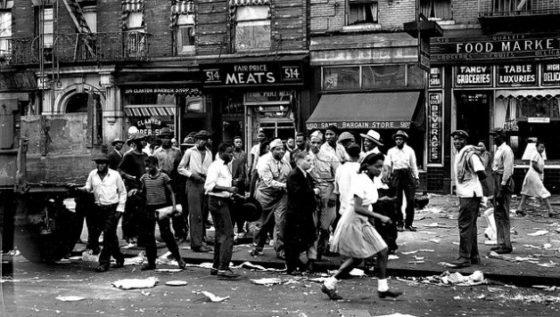 The event that led up to the riot was based on an incident involving a rookie police officer, James Collins, an African-American woman named Margie Polite, and an African-American veteran known as Robert Bandy. Polite had checked into Hotel Braddock, only to find her room to be unsatisfactory. After being moved to a different room, Polite complained again and asked for a refund. As she was about to leave, she asked the porter back for the one dollar tip she had given him. He denied this transaction and an argument broke out in the hotel lobby

“In one account of the event, police officer James Collin tried to restrain and arrest Miss Polite. As this was occurring, Robert Bandy came down with his mother into the lobby to witness the struggle. The event concluded with Robert Bandy striking the police officer with the baton and James Collin, the officer, shooting him in the shoulder. A total of 16,100 men were deployed to quell the violence; they were comprised of 6,600 civil police officers, 8,000 states guardsman and some volunteers as well. Damages estimated at around 5 million dollars.”

Social inequality was acutely felt by African-Americans during the period of the riot. African-Americans felt that their services during World War II should have gained them the respect as Americans, yet they were still faced with the having to deal with the Jim Crow Laws that kept them segregated and disrespected.