During the early morning hours on June 2, 1863, Union troops based at Port Royal, South Carolina conducted a daring raid up the Combahee River, which winds inland from Port Royal Sound. Union Naval forces had captured Port Royal in November of 1861. When Port Royal fell to Union forces, the surrounding lands were abandoned by planting families, but hundreds of enslaved people were still there.

The group advanced upon the Combahee River plantation destroying several plantations and carrying away the enslaved. Many planters and overseers fled area plantations ahead of the Union troops. Several infantry regiments in the Union Army were formed from these former slaves, including the 2nd South Carolina Infantry who were led by Harriet Tubman and under the command of Col. James Montgomery. Tubman had gained vital information about the location of Rebel torpedoes planted along the river from slaves who were willing to trade information for freedom. Montgomery was a “Jayhawker” from Kansas who had fought in numerous clashes between pro- and anti-#slavery forces in Kansas and Missouri prior to the war. 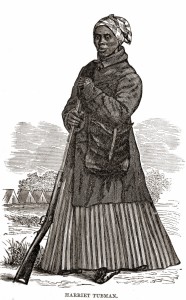 There were 750 slaves freed during the raid. When the boats arrived, hundreds of slaves stood on the shore and all wanted to get on at once. After the boats were filled to capacity and beyond, the throng of escaping slaves still ashore held on to the boats to prevent them from leaving. There was fear of the boats capsizing, the oarsmen beat at the hands of the slaves to get them to move, but many of them would not let go. The small boats made several trips back and forth to load those who wanted to leave.