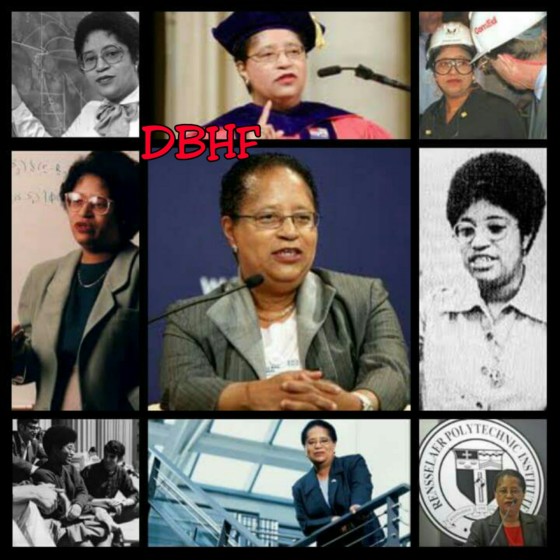 Shirley Ann Jackson is a physicist, and the 18th president of Rensselaer Polytechnic Institute. She received her Ph.D. in physics from the Massachusetts Institute of Technology in 1973, becoming the 1st African American woman to earn a doctorate from MIT in nuclear physics.
Jackson has described her interests:
“I am interested in the electronic, optical, magnetic, and transport properties of novel semiconductor systems. Of special interest are the behavior of magnetic polarons in semimagnetic and dilute magnetic semiconductors, and the optical response properties of semiconductor quantum-wells and superlattices. My interests also include quantum dots, mesoscopic systems, and the role ofantiferromagnetic fluctuations in correlated 2D electron systems.”
HER EDUCATION: Jackson was born in Washington D.C. Her parents, Beatrice and George Jackson, strongly valued education and encouraged her in school. Her father spurred on her interest in science by helping her with projects for her science classes. At Roosevelt High School, Jackson attended accelerated programs in both math and science, and graduated in 1964 as valedictorian.

Jackson began classes at MIT in 1964, one of fewer than twentyAfrican American students and the only one studying theoretical physics. While a student she did volunteer work at Boston City Hospital and tutored students at the Roxbury YMCA.

She earned her bachelor’s degree in 1968, writing her thesis on solid-state physics.

Jackson elected to stay at MIT for her doctoral work, in part to encourage more African American students to attend the institution. She worked on elementary particle theory for her Ph.D., which she completed in 1973, the 1st African-American woman to earn a doctorate degree from MIT.

Her research was directed by James Young.