Jane Edna Hunter was a pioneering African-American social worker. Hunter established the Working Girls Association in Cleveland, in 1911, to offer shelter, assistance, and education to women. It later became the Phillis Wheatley Association of Cleveland, which provides social services for children, the elderly and people in need.

Hunter was born in South Carolina in 1882. Her parents were wage earners on the Woodburn Plantation Farm. After her father died in 1892, she did housework for local families. She began school at the age of 14, attending the Ferguson and Williams Academy in Abbeville, South Carolina. She graduated with an eighth-grade education in 1900. She returned to work as a domestic. She was briefly married to Edward Hunter, who was about 40 years her senior.

She moved to Cleveland in 1905 and quickly became a leader in the black community. A Cleveland Law School grad, she oversaw an 11-story residence for black women and was active in a number of civic- and social-minded groups and causes, including the National Association of Colored Women.

A Cleveland Law School grad, Hunter oversaw an 11-story residence for black women and was active in a number of civic- and social-minded groups and causes, including the National Association of Colored Women. She established the Women’s Civic League of Cleveland in 1943, and created the Phillis Wheatley Scholarship Fund. Hunter wrote an autobiography, A Nickel and a Prayer, in 1940.

Hunter held honorary degrees from Allen University, Fisk University, Central State University and Tuskegee Institute. She was on the Board of Directors and was a Vice President of the National Association for the Advancement of Colored People (NAACP). Her health failed in the mid-1950s. She lived in a nursing home from the early 1960s until her death on January 13, 1971. 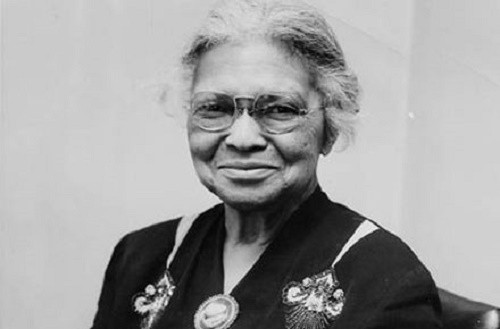