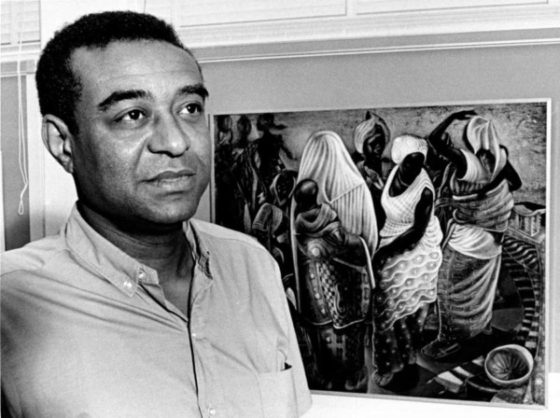 John Thomas Biggers was an African-American muralist who came to prominence after the Harlem Renaissance and toward the end of World War II. Biggers has worked on creating works critical of racial and economic injustice.

Biggers was born in a shotgun house built by his father in Gastonia, North Carolina. His father Paul was a Baptist preacher, farmer, shoemaker, schoolteacher, and principal of a three-room school. His mother Cora was a housekeeper for white families. When Cora’s husband died in 1937, she took a job in an orphanage for Black children, and John and his brother Joe were sent to Lincoln Academy, an American Missionary Association school in Kings Mountain, North Carolina.

After graduating from Lincoln, Biggers attended Hampton Institute (now Hampton University). Biggers planned to become a plumber (his Hampton application included boiler room drawings), but his life took a dramatic change of course when he took an art class with Viktor Lowenfeld, a Jewish refugee who in 1939 fled from Nazi persecution in Austria before World War II. Lowenfield exposed his students to works by African Americans and was concerned with altering his students’ perceptions toward their African heritage by introducing them to the religious and social context of African art, of which the Hampton Museum had a significant collection.

In 1943, he was drafted and joined the U.S. Navy, which was at the time segregated. He remained stationed at the Hampton Institute and made models of military equipment for training purposes. In that same year, his talents were recognized when his work was included in a landmark exhibit Young Negro Art at the Museum of Modern Art in New York. Biggers was discharged in 1945.

Biggers served as the founding chairman of the art department at Houston’s Texas State University for Negroes (now Texas Southern University) in 1949. “Over the next thirty-four years Biggers trained the next generation of African American artists and teachers that form a vital part of Biggers’s legacy.” Biggers retired from Texas Southern University in 1983.Biggers won first prize for his painting The Cradle at the annual exhibition at the Museum of Fine Arts in Houston in 1950. John Thomas Biggers died on January 25, 2001.