June 29, 1820: The United States Revenue-Marine cutter Dallas captured the slave ship Antelope, carrying some 280 Africans, off the coast of Florida (which was still Spanish at the time) on suspicion that it intended to illegally import slaves into the United States. The ship had been built in the U.S. and named Antelope. It was later sold to a Spanish owner, renamed Fenix, and licensed by the Spanish government to carry slaves from Africa to Cuba. 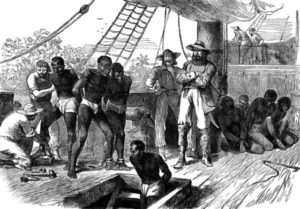 The Antelope had been captured by a privateer at Cabinda, renamed General Ramirez, and used to transport slaves already on board, as well as slaves taken from other ships flying the Portuguese flag, and from an American ship. The Antelope, its crew, and the Africans aboard were taken to Savannah, Georgia.

Captain John Jackson of Dallas filed a claim (called a “libel” in admiralty law) in federal court in admiralty in Savannah to be paid either $25 a head for the Africans on the Antelope under the provisions of the 1819 Act in Addition to the acts prohibiting the slave trade, if they were free, or the salvage value of property lost at sea, if they were slaves of Spanish and Portuguese owners.

Later in August Richard W. Habersham, the United States District Attorney for Georgia, filed a libel in court that under the Act in Addition, the Africans on the Antelope were free, on the grounds that they had been removed from Africa by persons intending to sell them in the United States.