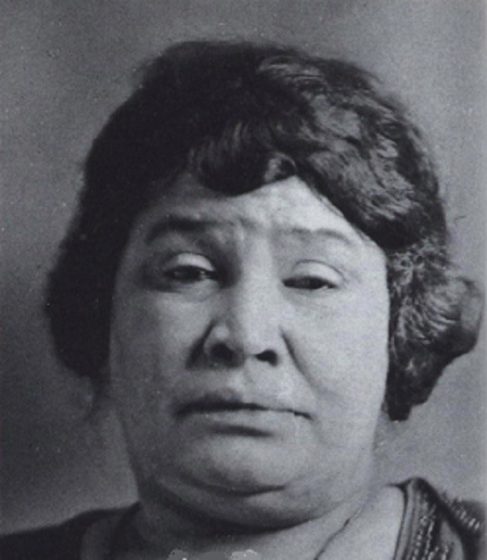 Lulu White was one of the most notorious and financially successful madams in New Orleans’s Storyville. Established in 1897, Storyville was a red-light district in which prostitution and other vices were tolerated though not legalized.

White called herself the “Diamond Queen,” and promoted herself and the prostitutes at her Basin Street bordello, Mahogany Hall, as octoroons (one-eighth black). In doing so, White defied the segregation laws in place in Louisiana at the time.

White was born in Alabama in 1868, though she claimed Jamaica, Cuba, and Alabama as birthplaces over the years. Her surname was Hendley, but little else is known about her early life. She fashioned her own identity, creating a persona that relied in part upon mysterious origins and ambiguous racial ancestry.

White appeared first in the city directory in 1888, in a neighborhood comprised of “colored” female boardinghouses and brothels. At the height of her career as a madam, White had many powerful associates. She was ostentatious and infamous, earning the nickname “notorious negress” from the press. She flouted the rules of Jim Crow and flaunted her wealth and connections. Her bordello included a parlor where the walls and ceiling were made of mirrors; pianists played jazz; and women performed “the naked dance” for customers who drank champagne. Mahogany Hall was expensive and racially exclusive; though the women were purported to be octoroons, only white men were allowed to patronize them.

White was arrested several times over the years, mostly for running a disorderly house or selling liquor illegally, but occasionally for violent offenses, including attempted murder. Yet she did not serve time in jail until after Storyville officially closed on November 12, 1917.

On November 6, 1918, White was arrested for violating the Draft Act, which prohibited prostitution within ten miles of a military facility. Her sentence was a year and a day in the penitentiary. After serving about three months, she applied for a pardon, citing poor health, and President Woodrow Wilson commuted her sentence. White returned to New Orleans and immediately started running her business again. She continued to operate a brothel until she died, on August 20, 1931.