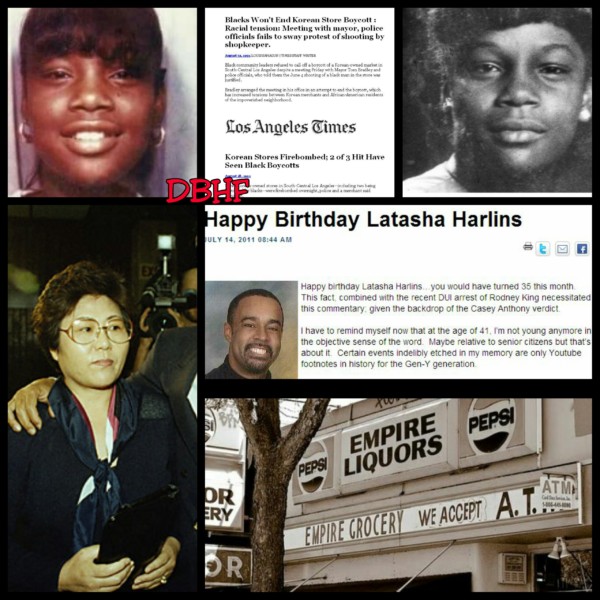 Latasha Harlins was a student at Westchester High School in Los Angeles. Because Harlins’ death came just 13 days after the videotaped beating of Rodney King and Du was imposed with a probation, a $500.00 fine and community service for her action, some sources cited the shooting as one of the causes of the 1992 Los Angeles riots.

DAY OF THE MURDER: The South Los Angeles store, Empire Liquor was normally staffed by Du’s husband and son. However, on the morning of the shooting, Du was working behind the counter, and her husband was outside resting in the family’s van.

Du saw Harlins putting a bottle of orange juice in her backpack. Du erroneously concluded that Harlins was attempting to steal, evidently not seeing the money Harlins was holding. Du attempted to grab Harlins by the sweater and snatched her backpack. Harlins then struck Du with her fist three times, knocking Du to the ground.

After Harlins backed away Du then threw a stool at her. Harlins then picked up the orange juice that dropped during the scuffle, threw it on the counter and turned to leave. Du reached under the counter to retrieve a handgun. Du then fired at Harlins from behind at a distance of about 3 feet and shot her in the back of her head, killing her instantly.

Du’s husband, Billy Heung Ki Du, heard the shot and rushed into the store. After speaking to his wife, who asked for whereabouts of Harlins before fainting, he dialed 9-1-1 to report an alleged holdup. Harlins died with $2 in her left hand.

THE TRIAL & VERDICT: Du testified on her own behalf, stating that it was self-defense and that her life was in danger, but her words were contradicted by the statements of the two witnesses present at the time and the security camera footage, which showed her shooting Harlins in the back of the head as Harlins was attempting to leave the store.

However, the Los Angeles police department ballistics expert report also found that the handgun Du used was altered in such a way that, compared to an ordinary handgun, much less pressure on the trigger was necessary to result in firing.

On November 15, 1991 the jury found Du guilty of voluntary manslaughter with a 16-year prison sentence recommendation, believing that Du’s shooting was fully within her control and she fired the gun voluntarily.

The presiding judge, Joyce Karlin reduced the sentence to probation of 5 years, 400 hours of community service, and a $500.00 fine.

Read about the aftermath and the impact of this tragic story at: Daily Black History Facts