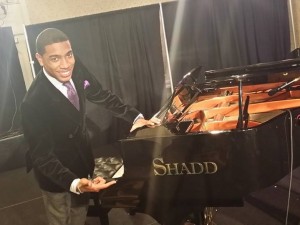 Pianist Christian Sands stands with a Shadd Piano at the Mid-Atlantic Jazz Festival in 2014.

At the Mid-Atlantic Jazz Festival in February, one couldn’t help but notice the striking new grand piano on the main stage, emblazoned with the name SHADD. When the many accomplished pianists that wee­­kend sat down to strike those keys, it was equally easy to spot their delight in the instrument.

For Shadd, piano making is part of his birthright. His grandparents were musicians: His grandmother was a ragtime pianist in the South in the ’30s, and his grandfather invented (and performed on) a collapsible drum set. (He never patented it, a lesson his grandson learned.) Shadd’s father was himself a piano technician, restorer, builder and performer — as well as a trombonist. And Shadd’s aunt was the NEA Jazz Master pianist and vocalist Shirley Horn. A child prodigy, young Warren made his own concert debut at age 4.

Shadd Pianos are now in churches and concert venues across the U.S. — including the set of American Idol, where house keyboardist Wayne Linsey will play it on Wednesday night’s episode. On a recent visit to Warren Shadd’s home in a suburb of Washington, D.C. — a home that doubles as the Shadd Piano showroom — he spoke about his life and work.