In 1958, Olivia Ferguson McQueen, a sixteen-year-old rising senior at the all-black Jackson P. Burley High School, led a group of students in challenging school segregation in Charlottesville. After a federal district court judge ruled in the students’ favor, the governor closed the all-white Lane High School, where McQueen was to attend, rather than allow integration.

State and federal courts simultaneously ruled that closing the schools violated Virginia’s constitution in 1959. After failing to force McQueen to complete the school year at Burley, the city’s school board provided tutors in its office for her and other plaintiffs in the suit.

McQueen’s senior year was difficult, despite encouragement from teachers and activists, she was isolated from her peers and did not get to enjoy the many activities available to her counterparts. While McQueen watched her friends from Burley High receive their diplomas in June 1959, she had no ceremony and received only a makeshift certificate indicating the classes she had completed. Years later in 1963, she perservered when she earned a bachelor’s degree in childhood education from Hampton Institute (now Hampton University). She later earned a master’s degree in education from Trinity College, in Washington, D.C.

After spending her career as an educator outside Virginia, McQueen received her official high school diploma from the Charlottesville Public Schools on May 25, 2013. 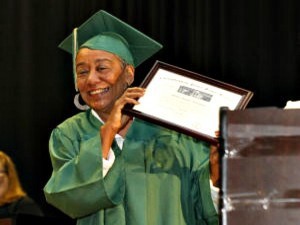