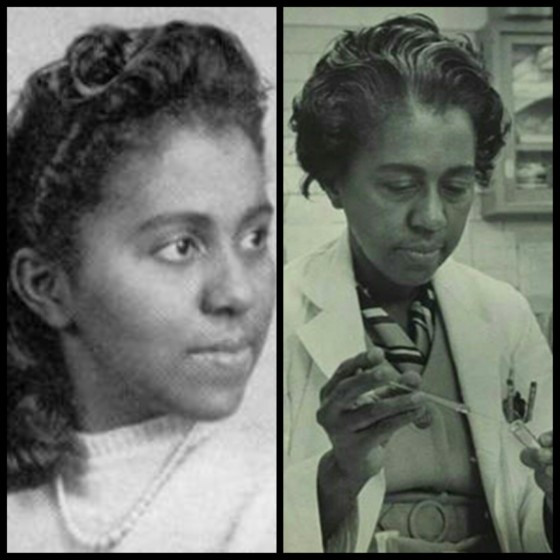 Marie Maynard Daly was a biochemist. She was the 1st African American woman in the United States to earn a Ph.D. in Chemistry (awarded by Columbia University in 1947).

Her many honors included an induction into Phi Beta Kappa.

ABOUT DALY: Daly’s father had immigrated from the British West Indies, found work as a postal clerk, and eventually married Helen Page of Washington, D.C. They lived in New York, and Daly was born and raised in Corona, Queens.

Daly’s father, who had attended Cornell University with intentions of becoming a chemist, was unable to complete his education due to a lack of funds. His daughter was there for continuing her father’s legacy by majoring in chemistry. Many years later, Daly started a Queens College scholarship fund in her father’s honor to assist minority students majoring in chemistry or physics.

Daly remained at Queens College for another year, working as a laboratory assistant while attending graduate school at New York University. She completed her Master in Chemistry in one year. She then enrolled in the doctoral program at Columbia University, where, under the supervision of Dr. Mary L. Caldwell, she completed her Ph.D. in chemistry in 1947.

Caldwell, who had a doctorate in nutrition, helped Daly discover how chemicals produced in the body contribute to food digestion.

After being awarded an American Cancer Society grant to support her postdoctoral research, she joined Dr. A. E. Mirsky at the Rockefeller Institute, where they studied the cell nucleus.

In 1953, after Watson and Crick described the structure of DNA, Daly’s world changed significantly: suddenly, the cell nucleus research field was flooded with funding opportunities. Her work flourished in the new environment.

In 1955 Daly returned to Columbia’s College of Physicians and Surgeons to teach biochemistry. She began collaborating with Dr. Quentin B. Deming to investigate the underlying causes of heart attacks. They found that high cholesterol levels contributed to the blockage of arteries that supply oxygen to the heart. She also investigated the effects of sugar on the function of coronary arteries. Later, she became a pioneer in studying the impact of cigarette smoking on the lungs.

In 1960 Daly and Deming moved to Yeshiva University at the Albert Einstein College of Medicine in New York City. At Yeshiva, she continued her research and taught biochemistry courses. She enjoyed teaching medical students and was dedicated to increasing the number of minority students enrolled in medical schools.

At Albert Einstein, Daly became a champion for diversity, working to increase the representation of minorities in science.

Dr. Daly was made a fellow of the American Association for the Advancement of Science and was named one of the Top 50 Women in Science, Engineering, and Technology by the National Technical Association in 1999.

HER AHA CAREER & RETIREMENT: Dr. Daly also served as an investigator for the American Heart Association; she was especially interested in how hypertension affects the circulatory system. She was a member of the prestigious Board of Governors of the New York Academy of Sciences for two years.

She was made a fellow of the American Association for the Advancement of Science and was named one of the Top 50 Women in Science, Engineering, and Technology by the National Technical Association in 1999.

Dr. Daly retired from the Einstein College of Medicine in 1986, and in 1988 she established a scholarship for African American chemistry and physics majors at Queens College in memory of her father.