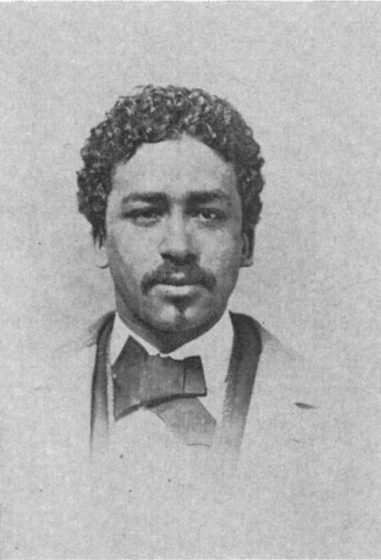 Richard Theodore Greener graduated from Harvard with honors in 1870, he earned the distinction of being the first African American to earn a Bachelor of Arts degree from the university.

Greener was born on January 30, 1844, in Philadelphia, to Richard Wesley Greener and Mary Ann Le Brune. From the age of ten, he was raised in Boston, where he attended the Broadway Grammar School in Cambridge, Massachusetts, until the age of fourteen. He dropped out of school to help support his family. Two of his employers help support him through the preparatory school at Oberlin College in Ohio from 1862 to 1864 and Phillips Academy in Andover, Massachusetts, from 1864 to 1865.

In 1865, Greener was admitted to Harvard University as an experiment in the education of African Americans. Five years later, Greener graduated with honors, the first African American to receive a Bachelor of Arts degree from Harvard.

Greener taught in Philadelphia and Washington, D.C., briefly. He accepted the professorship of mental and moral philosophy at the recently integrated University of South Carolina in October 1873. He becomes the university’s first black faculty member.

In addition to instructing in philosophy, Latin, Greek, and law, Greener taught students in the preparatory school. He gave the university’s commencement address in 1874 and served as university librarian for six months in 1875. He earned a law degree from the University of South Carolina in 1876 and was admitted to practice law in the South Carolina Supreme Court.

The university closed in June 1877 by the newly elected Democratic regime, Greener resigned his professorship and moved to Washington, D.C., where he took a position as a clerk in the U.S. Treasury Department. He served as dean of the Howard Law School from 1879 to 1880 and opened a law practice.

In the 1896 presidential election, Greener served as the head of the “colored men’s bureau” of the Republican National Committee in Chicago. Because of his hard work and dedication to the Republican Party, he was appointed as the U.S. commercial agent in Vladivostok, Russia in 1898, a position he held until 1905.

Greener returned to the United States in 1906 and settled in Chicago. He occasionally lectured on his career for the remainder of his life, including on visits to South Carolina in 1906 and 1907. Greener died on May 2, 1922.