Robert Franklin Williams was an American civil rights leader and author, best known for serving as president of the Monroe, North Carolina, chapter of the NAACP in the 1950s and early 1960s. At a time when racial tension was high and official abuses were rampant, Williams was a key figure in promoting armed black self-defense in the United States.

Williams was born on February 26, 1925 in Monroe, North Carolina, to Emma Carter and John L. Williams. His grandmother was a former slave who gave Williams a rifle with which his grandfather, a Republican campaigner and publisher of the newspaper The People’s Voice, had defended himself in the hard years after Reconstruction in North Carolina. At the age of 11, Williams witnessed the beating and dragging of a black woman by a police officer, Jesse Helms, Sr. Later chief of police, he was the father of future U.S. Senator Jesse Helms.

Williams eventually joined the Great Migration and traveled North to find work during World War II. He witnessed the race riots in Detroit and was drafted in 1944; he served a year and a half in the segregated Marines before returning home.

After returning to Monroe from the Marines in 1955, Williams joined the local chapter of the NAACP. The chapter had not been very active and was declining in numbers. However, Williams, who was elected president, worked on goals to change the segregated town along with Dr. Albert E. Perry. They led pickets to integrate the public libraries and swimming pools. Although most of their demonstrations were peaceful, some drew gunfire. 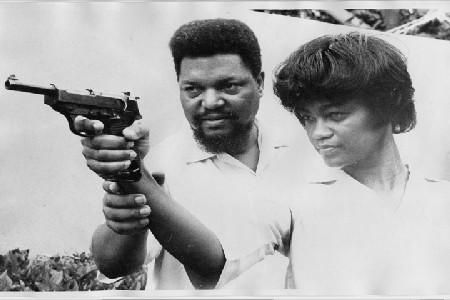 Alarmed at the violence that civil rights activities aroused, Williams had applied to the National Rifle Association for a charter for a local rifle club. He called the Monroe Chapter of the NRA the Black Armed Guard, made up of about 50-60 men, some of which veterans like Williams. They were determined to defend the local black community from racist attacks.

In the summer of 1957, rumors that the KKK was going to attack the house of Dr. Perry, a practicing physician and vice-president of the Monroe NAACP began to spread. Williams and his men of the Armed Guard went to Perry’s house to defend it, fortifying it with sandbags. When numerous KKK members appeared and shot from their cars, Williams and his followers returned the fire, driving them away.

Williams went to Cuba in 1961 by way of Canada and then Mexico. He regularly broadcast addresses to Southern black resident on “Radio Free Dixie.” He established the station with assistance from Cuban President Fidel Castro, and operated it from 1962 to 1965. During this stay, Mabel and Robert Williams published a newspaper, The Crusader.

He also wrote his book, Negroes With Guns, while in Cuba. It had a significant influence on Huey P. Newton, founder of the Black Panthers. Although Williams was not living in the United States, he was elected president of the US-based Revolutionary Action Movement in 1964.

Williams returned via London, England, to Detroit, Michigan, in 1969. He was immediately arrested for extradition to North Carolina for trial on kidnapping. Shortly after he returned, the approaching period of détente augured a warming of relations with the People’s Republic of China. The charges against Williams were eventually dropped.