#Rosa Lee Ingram was working on land she sharecropped near the small town of Ellaville, Georgia, on November 4, 1947. A white neighbor, John Stratford confronted her angrily about some livestock that had roamed onto his property. It was told that Strafford attempted to sexually assault his neighbor Rosa Lee Ingram. As Rosa Lee Ingram fought Stratford off her teenaged sons rushed to aid her, 17-year old Wallace Ingram and 14-year old Sammie Lee Ingram came to her defense after hearing her screams. The teens arrived with farm tools to fight Stratford off their mother.

John Stratford had been armed with a shotgun and a pocket knife when he confronted Ingram. Stratford was killed due to several blows to the head, and local authorities then charged the Ingram family with murder. Rosa Lee and her sons were sentenced to death by electric chair, while another son, Charles was acquitted in a separate trial due to lack of evidence.

The case of the Ingram family received national press coverage during the post-World War II era, when the southern justice system and Jim Crow were under scrutiny. “Members of the Atlanta chapter of the National Association for the Advancement of Colored People (NAACP) rushed down to appeal the verdict, providing support to local white lawyer appointed to the case, S. Hawkins Dykes.  The Civil Rights Congress (CRC), a left-based organization, also became involved in raising funds for the Ingrams and publicizing their cause but also generating tensions with the NAACP which harkened back to the political splits seen in the Scottsboro cases of the 1930s.  When the Ingrams appealed in 1948, Georgia courts reduced the death sentences to life imprisonment but refused to take further action.” (Blackpast.org) 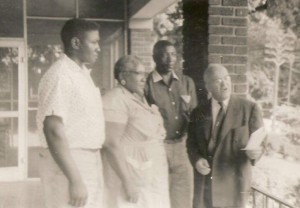 There were many female activists that emerged and kept the fight for Rosa Lee Ingram and her children going. Due to their fight for the family, the family were released on parole in 1959 for being “model prisoners.”