It was the last full day of school in Kirvin, Texas. The day that 17-year-old Eula Ausley was taken from her horse, carried into thick brush, and sexually mutilated and then beaten to death. Ausley’s family noticed she was missing and formed a search party to find her and found her body in a gruesome display, with Ausley’s head almost decapitated.

The search party quickly turned into a manhunt. Over armed 1,000 men searched the woods for any type of evidence that would give them a clue as to who violated and murdered Ausley.

Early into the search, the disgruntled wife of a black search party member told neighbors that her husband, McKinley “Snap” Curry, had come home the day of the murder covered with blood from what he claimed was a rabbit hunt. Despite the fact that Sheriff Horace Mayo already had two white suspects in custody, Curry now became the focus of the investigation. He was arrested and forced into a statement which implicated two other friends of Curry, 19-year-old Johnny Cornish and 46-year-old Mose Jones.

A mob formed mostly of the men from the search party outside the jail for vengeance. Shortly after midnight, the mob forced its way into the prison and dragged the three black suspects out of their cells. The men were driven to an empty lot between the old Baptist Church and the Methodist Church in Kirvin, which is where the gruesome ritual began.

The rioters gathered wood and a heavy plow was dragged on the lot to act as an anchor for the burning black men. Before the preparations were complete, the crowd grew anxious for a quicker punishment. The three men were taken from the car and thrown to the ground. Someone from the crowd pulled out a knife and castrated Curry. After enough wood was available, he was bound to the plow, surrounded by wood, and doused in gasoline. Curry was dead within ten minutes of being lit by a match. 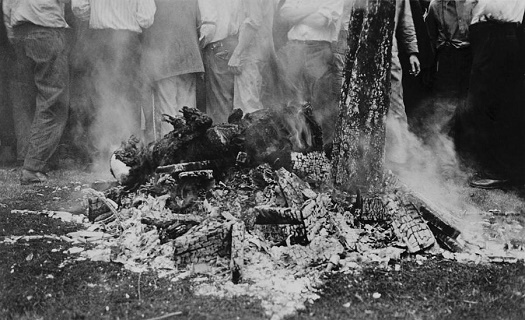 Jones was then brought forward into the fire. Supposedly, Jones broke free and made a run for it, but he ran directly into Eula’s uncle, Otis King. King then hit him with a rod from a Model T Ford, dislodging his eye from its socket. Jones was then pulled back into the fire and died.

Cornish saw what his friends went through and decided he did not want to suffer a long and painful death. He cursed the lynchers, grabbed the plow, and stuck his head into the fire to die. The three dead bodies were then piled up, doused again with kerosene and oil, and struck with a match. Whatever ashes the wind did not sweep up that morning were taken home as souvenirs.

Nevertheless, this was not the end of the rampage. Two days later, Shadrick Green, a friend of Cornish and Jones, was found hanging from a tree. He was naked with his neck broken and his body was riddled with bullets.

White paranoia began to spread rapidly, as they suspected that legions of armed blacks were approaching Kirvin to retaliate. Therefore, they began to leave all their lights on in their houses so no one would attempt to murder them during the night.

The black residents, on the other hand, left all their lights off, attempting to avoid the actual roaming bands of armed whites. The mobs roamed the streets and killed any black residents they could find. Blacks who managed to survive the killings fled the city.