The Second Battle of Fort Wagner of 1863 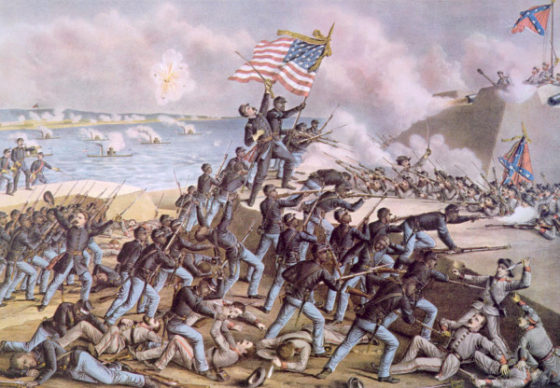 The 54th Regiment Massachusetts Volunteer Infantry was an infantry regiment that saw extensive service in the Union Army during the American Civil War. The regiment was authorized in March 1863 by the Governor of Massachusetts, John A. Andrew. Commanded by Colonel Robert Gould Shaw, it was commissioned after the passage of the Emancipation Proclamation.

July 18, 1863, when it spearheaded an assault on Fort Wagner near Charleston, South Carolina. 272 of the 600 men who charged Fort Wagner were “killed, wounded or captured.”

At this battle, Colonel Shaw was killed, along with 29 of his men. 24 more later died of wounds, 15 were captured, 52 were missing in action and never accounted for, and 149 were wounded. The total regimental casualties of 272 would be the highest total for the 54th in a single engagement during the war.

Although Union forces were not able to take and hold the fort (despite taking a portion of the walls in the initial assault), the 54th was widely acclaimed for its valor during the battle, and the event helped encourage the further enlistment and mobilization of African-American troops, a key development that President Abraham Lincoln once noted as helping to secure the final victory.

Decades later, Sergeant William Harvey Carney was awarded the Medal of Honor for grabbing the U.S. flag as the flag bearer fell, carrying the flag to the enemy ramparts and back, and singing “Boys, the old flag never touched the ground!” While other African-Americans had since been granted the award by the time it was presented to Carney, Carney’s is the earliest action for which the Medal of Honor was awarded to an African-American.

Ironically, during the week leading up to the 54th’s heroic sacrifice near Charleston, simmering racial strife climaxed in the New York Draft Riots. African-Americans on the city’s waterfront and Lower East Side were beaten, tortured, and lynched by white mobs angered over conscription for the Union war effort. These mobs directed their animosity toward blacks because they felt the Civil War was caused by them. However, the bravery of the 54th would help to assuage anger of this kind.

LEGACY:
●A monument, constructed 1884–1898 by Augustus Saint-Gaudens on the Boston Common, is part of the Boston Black Heritage Trail.

● Of the regiment, Governor John A. Andrew said:

“I know not where, in all human history, to any given thousand men in arms there has been committed a work at once so proud, so precious, so full of hope and glory.”

“Two months after marching through Boston, half the regiment was dead; at the dedication, William James could almost hear the bronze Negroes breathe.”Later he unflinchingly looks at Shaw’s and his men’s death: Shaw’s father wanted no monument except the ditch, where his son’s body was thrown and lost with his “niggers”.

● A Union officer had asked the Confederates at Battery Wagner for the return of Shaw’s body but was informed by the Confederate commander, Brigadier General Johnson Hagood, “We buried him with his niggers.” Shaw’s father wrote in response that he was proud that Robert, a fierce fighter for equality, had been buried in that manner. “We hold that a soldier’s most appropriate burial-place is on the field where he has fallen.”

● As a recognition and honor, at the end of the Civil War, the 1st South Carolina Volunteers, and the 33rd Colored Regiment were mustered out at the Battery Wagner site of the mass burial of the 54th Massachusetts.

● The story of the unit was depicted in the 1989 Academy Award winning film Glory starring Matthew Broderickas Shaw, Denzel Washington as Private Tripp, Morgan Freeman, Cary Elwes Jihmi Kennedy and Andre Braugher. The film re-established the now-popular image of the combat role African-Americans played in the Civil War, and the unit, often represented in historical battle reenactments, now has the nickname the “Glory” regiment.