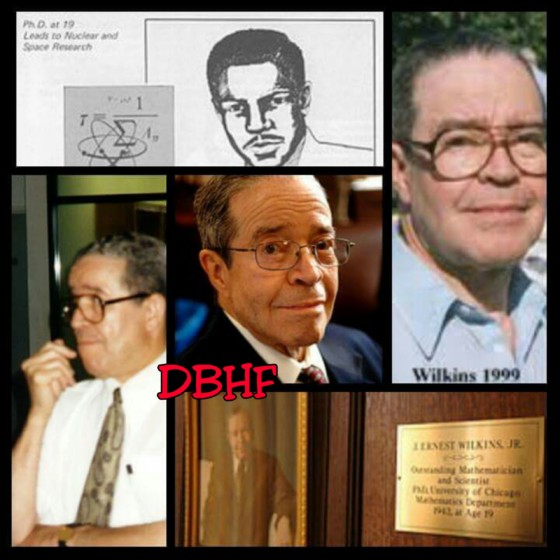 Jesse Ernest Wilkins, Jr. was an African American nuclear scientist, engineer, mathematician, who first gained fame when he entered the University of Chicago at age 13, becoming its youngest student ever.

His intelligence led to him being referred to as a “negro genius” in the media.

As part of a widely varied and notable career, Wilkins contributed to the Manhattan Project during the Second World War. He also gained fame working in and conducting nuclear physics research in both academia and industry. He wrote numerous scientific papers, served in various important posts, earned several significant awards and helped recruit minority students into the sciences.

His career spanned 7 decades and included significant contributions to pure and applied mathematics, civil and nuclear engineering, and optics.

During his studies and various careers he was affected by the prevalent racism that existed for much of his life.

EDUCATION: In 1940 Wilkins completed his B.Sc. in mathematics at age 17, then his M.Sc. at age 18, and finally went on to complete a Ph.D in mathematics at the University of Chicago, graduating in 1942 at age 19.

In order to improve his rapport with the nuclear engineers reporting to him, Wilkins later received both Bachelor’s and Master’s degrees in mechanical engineering from New York University in 1957 and 1960, thus earning 5 science degrees during his life.

CAREER: After initially failing to secure a research position at his alma mater (now called Tuskegee University) in Alabama.

In 1944 he returned to the University of Chicago where he served first as an associate mathematical physicist and then as aphysicist in its Metallurgical Laboratory, as part of the Manhattan Project. Working under the direction of Arthur Holly Compton and Enrico Fermi, Wilkins researched the extraction of fissionable nuclear materials, but was not told of the research group’s ultimate goal until after the atomic bomb was dropped on Hiroshima.

Wilkins was the codiscoverer or discoverer of a number of phenomena in physics such as the Wilkins effect, plus the Wigner-Wilkins and Wilkins spectra.

Wilkins then continued to teach mathematics and conduct significant research in neutron absorption with physicist Eugene Wigner, including the development of its mathematical models. He would also later help design and develop nuclear reactors for electrical power generation, becoming part owner of one such company.

In 1970 Wilkins went on to serve Howard University as its distinguished professor of Applied Mathematical Physics and also founded the university’s new PhD program in mathematics. During his tenure at Howard he undertook a sabbatical position as a visiting scientist at Argonne National Laboratory from 1976 to 1977.

From 1974 to 1975 Wilkins served as president of the American Nuclear Society and in 1976 became the second African American to be elected to the National Academy of Engineering.

From 1990 Wilkins lived and worked in Atlanta, Georgia as a Distinguished Professor of Applied Mathematics and Mathematical Physics at Clark Atlanta University, and retired again for his last time in 2003.

Throughout his years of research Wilkins published more than 100 papers on a variety of subjects, including differential geometry,linear differential equations, integrals, nuclear engineering, gamma radiation shielding and optics, garnering numerous professional and scientific awards along the way.

●The Wilkins effect, plus the Wigner-Wilkins and Wilkins spectra, discovered during the 1940s, are named or co-named after him.

●In March 2007 Wilkins was honored by his alma mater, in a special ceremony that included the dedication of his portrait and a plaque in the Eckhart Hall Tea Room of its Physical Sciences Division.