When Debi Thomas burst onto the sporting scene in 1986, she became the first African American skater to win national and world championships during her freshman year at Stanford University.

She was also was named Wide World of Sports’ Athlete of the Year and two years later, she added a second national title along with a bronze medal in the 1988 Olympics at Calgary.

But long before Thomas’ day in the spotlight, there was the unknown story of skater Mabel Fairbanks. Born on November 14, 1916 in New York City, Fairbanks discovered her lifetime passion while watching a Sonia Henje movie.

She then saw a pair of black skates in a pawnshop window and talked the dealer down to $1.50. They were two sizes too big, but that didn’t stop Fairbanks.

She stuffed them with cotton, found her balance on blades by going up and down the stairs in her building, and took to the nearby frozen lake.

It wasn’t long before Fairbanks was sailing across the ice, and a passerby suggested she try out the rink in Central Park, she was soon skating solid 6.0 judging, but the pro clubs wouldn’t have her because of her race. 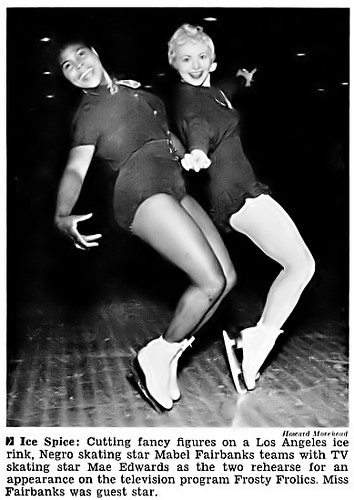 “I remember they said to me, we don’t have Blacks in ice shows,” said Fairbanks. “But I didn’t let that get in my way, because I loved to skate.” Fairbanks continued to refine her skill and returned to the rink again and again.

Then one day, the rink manager noted her persistence, along with the shiny pair of new skates her uncle bought from Macy’s, and let her inside. From then on, Fairbanks’ ability and sparkle shattered the race barrier at that pivotal rink, and professional skaters started giving her free lessons.

In the 1940s, Fairbanks came to Los Angeles and performed in nightclubs like Cyro’s. Soon Fairbanks was invited to skate on the road with the “Rhapsody On Ice” Show, even though she was used as “someone to skate in the dark countries.”

She wowed international audiences but returned to the states only to find it still blind to her talent, but not to her color. “They had a sign at the Pasadena Winter Gardens that read “Colored Trade Not Solicited,” Fairbanks remembers.

“But it was a public place, so my uncle had newspaper articles written about it and passed them out everywhere until they finally let me in.”

She landed a role on KTLA-TV’s “Frosty Follies” show and continued to perform at local showrooms, yet Fairbanks still wasn’t allowed to join professional skating clubs.

She got herself and other Blacks in by sending for individual memberships from the USPSA (United States Professional Skating Association) without letting them know they were black.

Fairbanks opened the door for other young Blacks to compete in skating, but as her pro years had passed Fairbanks became a teacher and coach in Culver City and the Hollywood Polar Palace.