William Banks was dining at the White House with President Richard Nixon in 1972 when the conversation turned to African-Americans’ scant involvement in broadcast media. “Who can explain blacks better than blacks?” Banks often liked to ask. He already controlled Detroit’s first black-owned radio station (WGPR-FM), and now wanted to launch the first black-owned TV station. The result was Nixon’s promise of a Federal Communications Commission license. 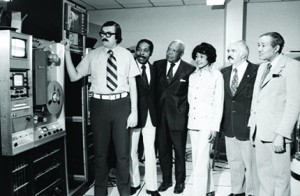 The door was opened — but not all the way — to Banks, who grew up a Kentucky sharecropper’s son. In 1973, the FCC required the station to start with enough operating funds for a whole year. Banks, a lawyer, Baptist minister, and founder in 1950 of the International Free and Accepted Modern Masons, considered offers from financial institutions unacceptable. He ran the Masons like a personal fiefdom and, with assets accrued through members’ monthly subscriptions, he had acquired WGPR-FM for the organization in 1964. To finance the TV station deal, Banks unloaded the Masons’ 100 acres on Florida’s Gold Coast, which had been purchased two years earlier. The $750,000 transaction netted a 50-percent profit.